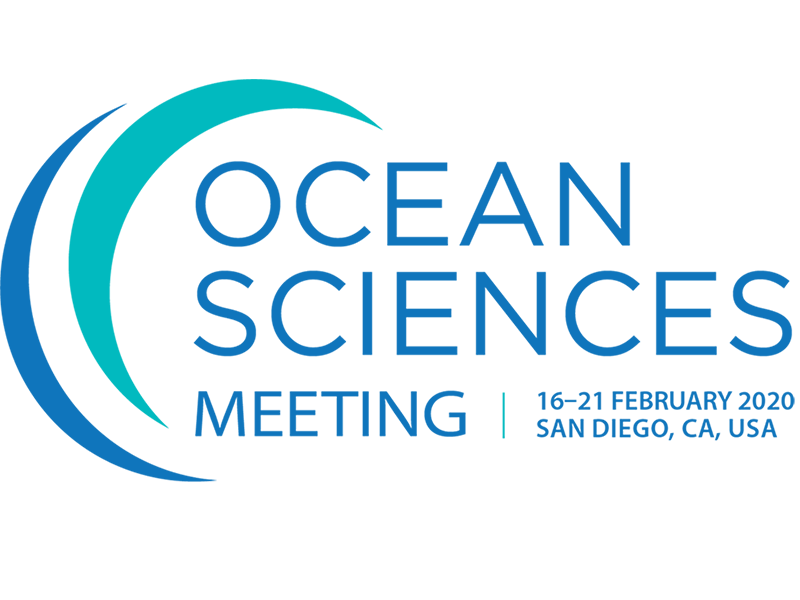 The Ocean Sciences Meeting  co-sponsored by the American Geophysical Union, the Association for the Sciences of Limnology and Oceanography, and The Oceanography Society  will be held in San Diego, California (16-21 Feb 2020).

You can also learn about PACE by visiting the NASA booth (#233 in the Exhibit Hall). PACE scientists and staff are also scheduled to present several Hyperwall talks.

NASA's Earth Science Division (ESD) team will present an update of status and plans, with significant time for discussion with the audience, which is expected to be comprised of current and potential investigators in ESD's ocean programs and/or those of its partner agencies, as well as current and potential users of its data and models. Highlighted items include status of operating and future satellite missions dedicated to ocean observing; implementation of Venture Class activities focusing on air-sea exchange, sub mesoscale oceanography, and ocean ecology and biogeochemistry; evolution of and plans for the research, applied sciences, and technology elements; contribution to interagency and international Earth observation and global change programs, and response to and preparation for community-based guiding documents, such as the U.N. Decade of Ocean Science. This year's Town Hall will also continue to emphasize ESD's progress in implementing the recommendations of the National Academies of Science, Engineering, and Medicine Decadal Survey, Thriving on Our Changing Planet: A Decadal Strategy for Earth Observation from Space, released in 2017.

Quantifying Carbon Export Pathways in the Global Ocean
The ocean's biological pump connects the surface ocean, where light-driven photosynthetic processes fix dissolved carbon dioxide, to the ocean's twilight zone, where exported carbon is consumed and transformed by a myriad of biological and physical processes as it transits to depth. Three basic pathways are thought to control organic carbon export in the open ocean - gravitational sinking, active migration by metazoans and physical advection and mixing - which are driven by a complicated combination of ecological, biogeochemical and physical oceanographic processes. Developing a predictive understanding of these export pathways and their attenuation with depth is critical for diagnosing present and future rates of ocean carbon sequestration. Recent advances in genomics, in situ particle imaging, remote sensing, geochemistry, autonomous sampling tools, along with recent investments in comprehensive interdisciplinary field programs like EXPORTS, COMICS, GOCART, CUSTARD, and WHOI's Ocean Twilight Zone makes achieving this goal possible. This session will highlight research that couples ecological, biogeochemical, and physical observations and modeling aimed at improving our understanding and quantification of the ocean's biological carbon pump.
From the Twilight Zone to the Troposphere: Ocean Optics Applications to Biogeochemical Cycling in and Through the Surface Ocean
Advances in remote sensing and in situ ocean optics technology have led to new interdisciplinary studies examining the connections between planktonic community structure and biogeochemical cycles, such as NAAMES, EXPORTS, and COMICS. Applications of hyperspectral reflectance, absorption,scattering, multichannel backscattering, and laser diffraction and particle imaging and sizing can yield in-depth information on phytoplankton and other particles in the water column, allowing for development of algorithms targeting next generation of Earth observing satellites (such as NASA's Plankton, Aerosol, Cloud and ocean Ecosystem mission - PACE). In this session we invite contributions from studies using ocean optics tools from shipboard, autonomous, airborne, or remote sensing platforms coupled with biogeochemical parameters to study connections between the surface ocean and the atmosphere or the surface ocean and the mesopelagic, including assessments of net community production, food web dynamics, export production and flux, ocean-to-atmosphere fluxes of aerosols and trace gases of biological origin.
Hyperspectral Sensing of Coastal Aquatic Environments
In response to mounting ecological pressures related to climate change and population growth, marine scientists and resource managers have increasingly turned to remote sensing as a means of providing timely and spatially coherent environmental information. Earth imaging sensor technology aboard aircraft and satellites has advanced rapidly from multispectral systems offering a small number of broad, discontiguous bands in the visible and infrared portions of the spectrum to imaging spectrometers with continuous, high-resolution coverage throughout the complete visible and near-infrared spectrum. The subject of hyperspectral remote sensing has rapidly gained momentum with the recent deployment of DESIS on the International Space Station, the launch of PRISMA, and planning for the NASA PACE and SBG sensors in response to the most recent decadal survey. NASA recently completed an airborne mission that mapped coral reefs in the tropical Pacific using PRISM, and applications have expanded to include small, lightweight systems deployable on commonly available drones, effectively placing advanced remote sensing capabilities in the hands of the individual researcher. Most recent investigations include merging the unique aspects of hyperspectral observations with other data to enhance knowledge of marine ecosystem health and biodiversity. The purpose of this session is to present and discuss the state of the art and novel application of hyperspectral remote sensing, from near-surface to space, for coastal aquatic environments. Papers are encouraged that cover all aspects of the topic including sensor development, new algorithmic approaches, emerging modes of deployment, and case studies spanning basic research to societally relevant applications. AGU