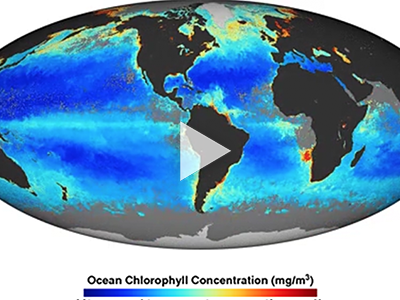 Click image to view movie (MP4, 1.2 MB). Credit: NASA
[03-Jan-12] At the base of the ocean food web are single-celled algae and other plant-like organisms known as phytoplankton. Like plants on land, phytoplankton use chlorophyll and other light-harvesting pigments to carry out photosynthesis, absorbing atmospheric carbon dioxide to produce sugars for fuel. The presence of chlorophyll changes the way water reflects and absorbs sunlight, allowing scientists to map the amount and location of phytoplankton. These measurements give scientists valuable insights into the health of the ocean environment, and help scientists study the ocean carbon cycle.