Our Living Planet From Space 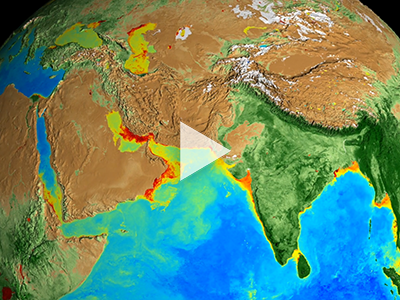 In the Northern Hemisphere, ecosystems wake up in the spring, taking in carbon dioxide and exhaling oxygen as they sprout leaves - and a fleet of Earth-observing satellites tracks the spread of the newly green vegetation.

Meanwhile, in the oceans, microscopic plants drift through the sunlit surface waters and bloom into billions of carbon dioxide-absorbing organisms - and light-detecting instruments on satellites map the swirls of their color.

This fall marks 20 years since NASA began continuously observing, not just the physical properties of our planet, but the one thing that makes Earth unique among the thousands of other worlds we have discovered: Life.

Satellites measured land and ocean life from space as early as the 1970s. But it was not until the launch of the Sea-viewing Wide Field-of-view Sensor (SeaWiFS) in 1997 that the space agency began what is now a continuous, global view of both land and ocean life. This new animation captures the entirety of this 20-year record, made possible by multiple satellites, compressing a decades-long view of life on Earth into a captivating few minutes. Credit: NASA GSFC
Watch Movie (MP4, 33.2 MB)