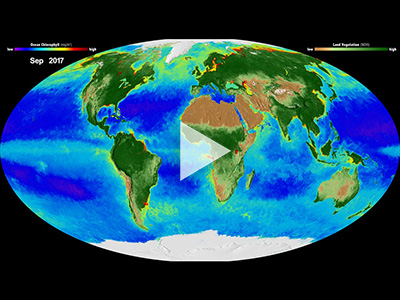 Click image to view movie (MP4, 66.4 MB). Credit: NASA GSFC
[14-Nov-17] This data visualization shows the Earth's biosphere from September 1997 through September 2017. It represents twenty years of data taken primarily by SeaStar/SeaWiFS, Aqua/MODIS, and Suomi NPP/VIIRS satellite sensors, and shows the abundance of life both on land and in the sea.

In the ocean, dark blue to violet represents warmer areas where there is little life due to lack of nutrients, and greens and reds represent cooler nutrient-rich areas. The nutrient-rich areas include coastal regions where cold water rises from the sea floor bringing nutrients along and areas at the mouths of rivers where the rivers have brought nutrients into the ocean from the land. On land, green represents areas of abundant plant life, such as forests and grasslands, while tan and white represent areas where plant life is sparse or non-existent, such as the deserts in Africa and the Middle East and snow-cover and ice at the poles. Credit: NASA GSFC
Watch Movie (MP4, 66.4 MB)