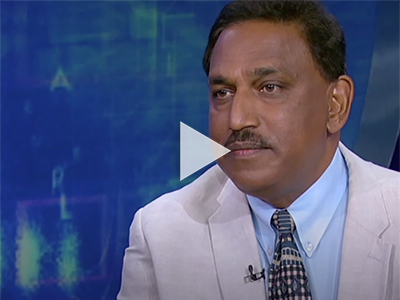 Click image to view movie (MP4, 44.6 MB). Credit: PBS
[02-Oct-18] In the Arabian Sea, algae blooms are taking over the base of the food chain which could prove catastrophic for 120 million people living on the coast. According to Dr. Joaquim Goes, Research Professor at Columbia University's Lamont-Doherty Earth Observatory in New York City, these enormous blooms can cover an area about three times the size of Texas.

Within the past 10 to 15 years, the Arabian Sea has transformed due to the melting of Himalayan snow caps and intensified monsoon conditions. Monsoon winds bring up nutrients from the deep sea, fueling the growth of algae blooms. The types of algae commonly found in these blooms, diatoms, are beneficial to fisheries. In some cases, however, too much algae goes uneaten by other members of the marine food web. When the algae sinks it is decomposed by bacteria, a process that removes oxygen from the ecosystem.

Another type of algae thriving in this area is the dinoflagellate Noctiluca scintillans, also known as “sea sparkle.” This species is unusual because it both photosynthesizes and consumes other organisms. Organisms that prefer Noctiluca as a food source – jellyfish, salps, squid, cuttlefish, and turtles – have caused the food web to shift, negatively impacting the availability of fish eaten by people in the region. Furthermore, Noctiluca cells can clog the gills of fish, suffocating them. This year, massive sardine beaching events have occurred in India. This is a result of sardines trying to escape oxygen-poor (“hypoxic”) conditions that have taken over surface waters.

Dr. Goes’ team has isolated Noctiluca cells in laboratory cultures, providing the opportunity to study some of their unusual characteristics. For instance, this species can tolerate relatively acidic (low Ph) conditions. As the ocean becomes more acidic, it will likely favor larger and more widespread blooms of Noctiluca. Not only will marine life be impacted, but life on land, as well. In addition to hurting the seaside tourist industry, thick blooms of Noctiluca can clog seawater systems used by desalination plants and oil refineries.

Funded by NASA, Dr. Goes and his team are developing a coupled physical-biological computer model to predict the occurrence of hypoxic conditions at the ocean surface. This information could be used to predict Noctiluca blooms five to seven days in advance. Such an “early warning system” could potentially aid the aquaculture industry, allowing their stocks to be moved to more oxygen-rich environments. His research group is also working to implant microchips in Noctiluca cells, including laboratory experiments designed by high school students to determine if these algae can uptake microscopic particles such as silicon or plastic. Credit: PBS
Watch Movie (MP4, 44.6 MB)