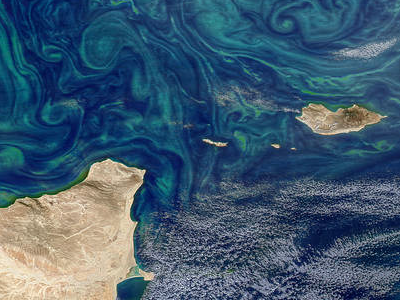 Phytoplankton blooms can sometimes be seen from space, as in this image from the Gulf of Aden, shown here in an image taken by the MODIS instrument on NASA’s Aqua satellite. Credit: NASA's Earth Observatory
(08-Aug-18) Satellite images of phytoplankton blooms on the surface of the ocean often dazzle with their diverse colors, shades and shapes. But phytoplankton are more than just nature's watercolors: They play a key role in Earth's climate by removing heat-trapping carbon dioxide from the atmosphere through photosynthesis. NASA