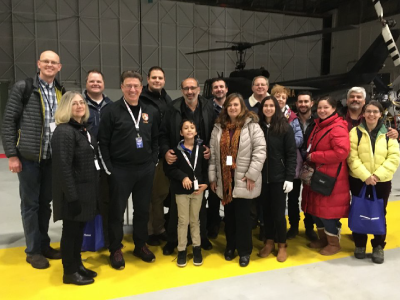 The UMBC HARP satellite team with their families and colleagues from Space Dynamics Lab on the morning of the rocket launch (November 2, 2019). Credit: Sarah Hansen, M.S. '15
(07-Aug-20) Some of the students who worked on the award-winning HARP, are now at work on HARP2, which will build on technology developed for HARP. HARP2 will travel on the major NASA PACE mission, collecting data that will inform studies of air quality, clouds, precipitation, and climate.

UMBC's Hyper-Angular Rainbow Polarimeter (HARP) Satellite, which began in Vanderlei Martins's imagination more than a decade ago, has been flying in low-Earth orbit since February 19. It contains new technology that can collect detailed information about tiny particles in the atmosphere - previously unmeasurable data that will inform climate studies for years to come. The HARP team, including a large number of students, overcame obstacles at every step of the satellite's journey to space, and its success is already being recognized.

On August 6, the American Institute of Aeronautics and Astronautics (AIAA) named HARP the Small Satellite Mission of the Year. To qualify as a "smallest," satellites must weigh less than 150 kg (330 lbs.). To win, a smallsat must demonstrate significant improvement in the capability of small satellites. That could mean advances in their structural design, scientific instrumentation, communications ability, or other factors.

A popular vote informed the AAIA SmallSat Technical Committee's final decision. After voters selected HARP as a finalist, the smallsat went up against nine other finalists, including teams from the U.S., Guatemala, Singapore, and France. Votes for HARP poured in from all over the world, including ballots from 40 states and countries on six continents. In the end, HARP emerged as the winner. UMBC News