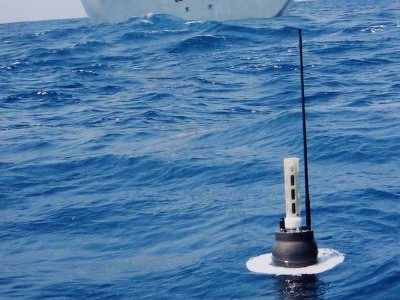 An Argo float shortly before recovery by the Japan Coast Guard vessel Takuyo. Credit: Japan Coast Guard
(29-Oct-20) A single drop of seawater holds millions of phytoplankton, a mix of algae, bacteria, and protocellular creatures. These photosynthesizing microbes pump out more than half of the planet's oxygen, while slowing climate change by capturing an estimated 25% of the carbon dioxide released from burning fossil fuels. But the scale of this vital chemistry is mostly a guess. Today the National Science Foundation announced it will spend $53 million to fund 500 new drifting floats in the first major expansion of the Argo array, a set of 4000 floats that tracks rising ocean temperatures. Science