List View »The goal of EXPORTS is to track the fate of ocean carbon and study its implications for Earth's carbon cycle. EXPORTS will use advanced ocean observing tools and satellite observations to build a more complete picture of these complex processes. Understanding the location and characteristics of phytoplankton is key to discovering their role in the ocean ecosystem. A second EXPORTS field campaign is scheduled for the North Atlantic in Spring 2021. 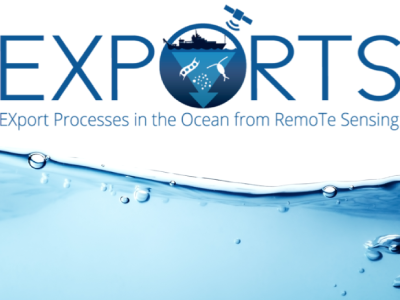 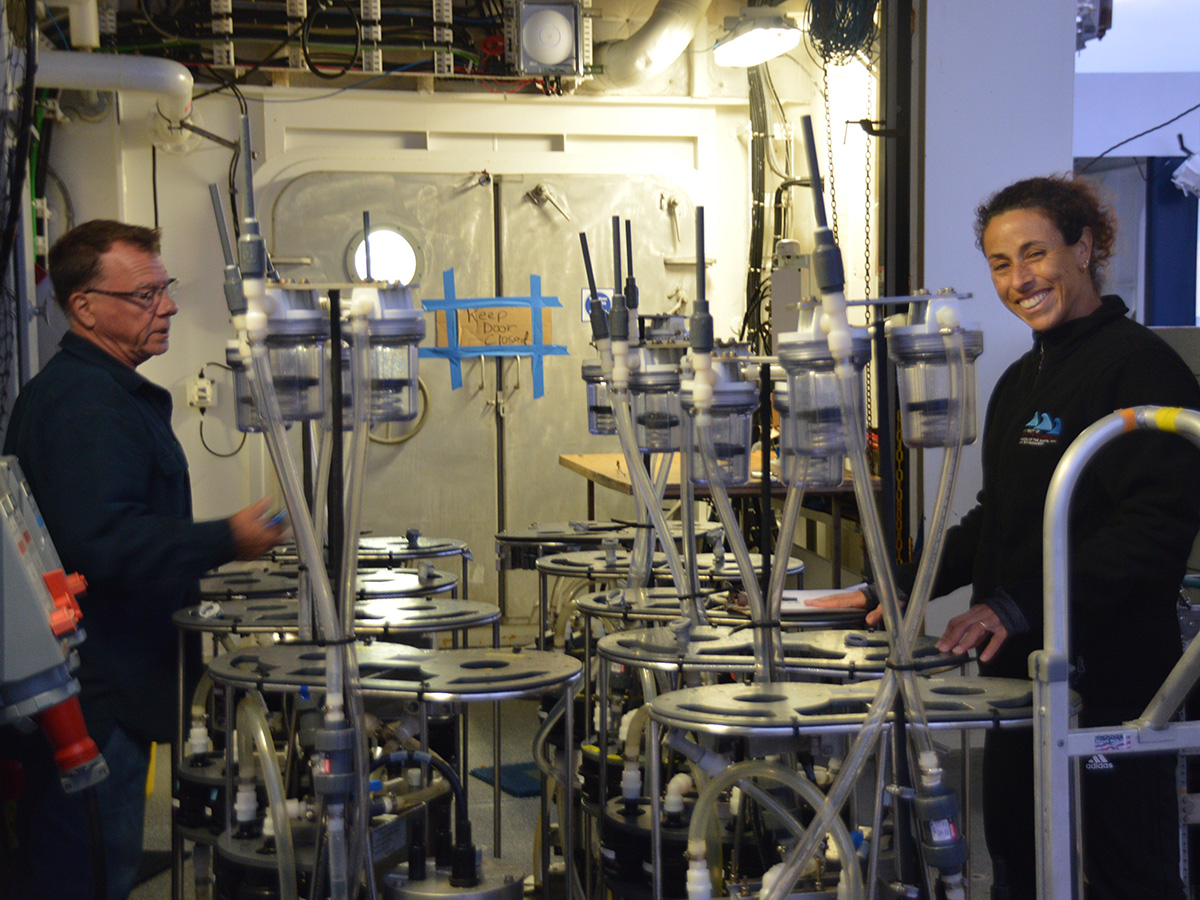 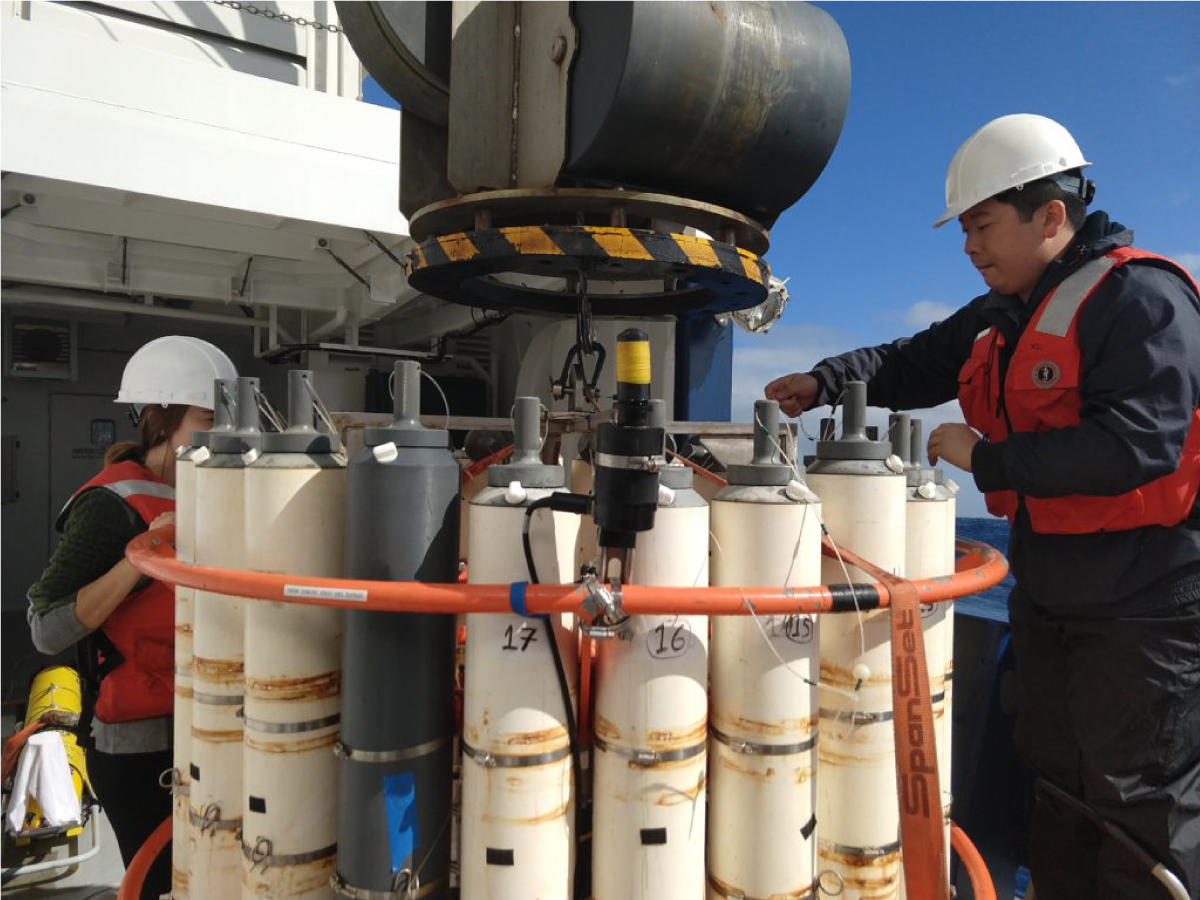 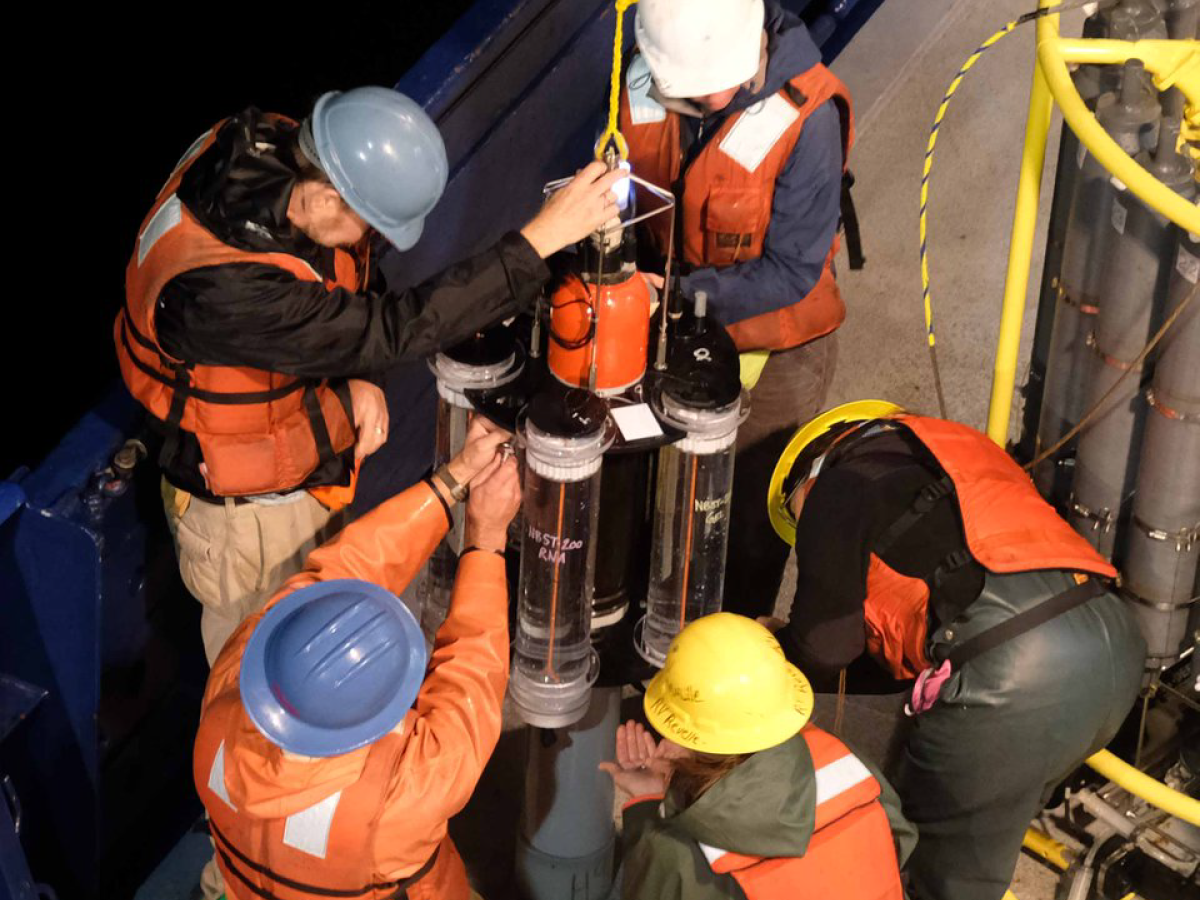 Researchers bring an NBST onto the deck of the R/V Roger Revelle. Credit: NASA 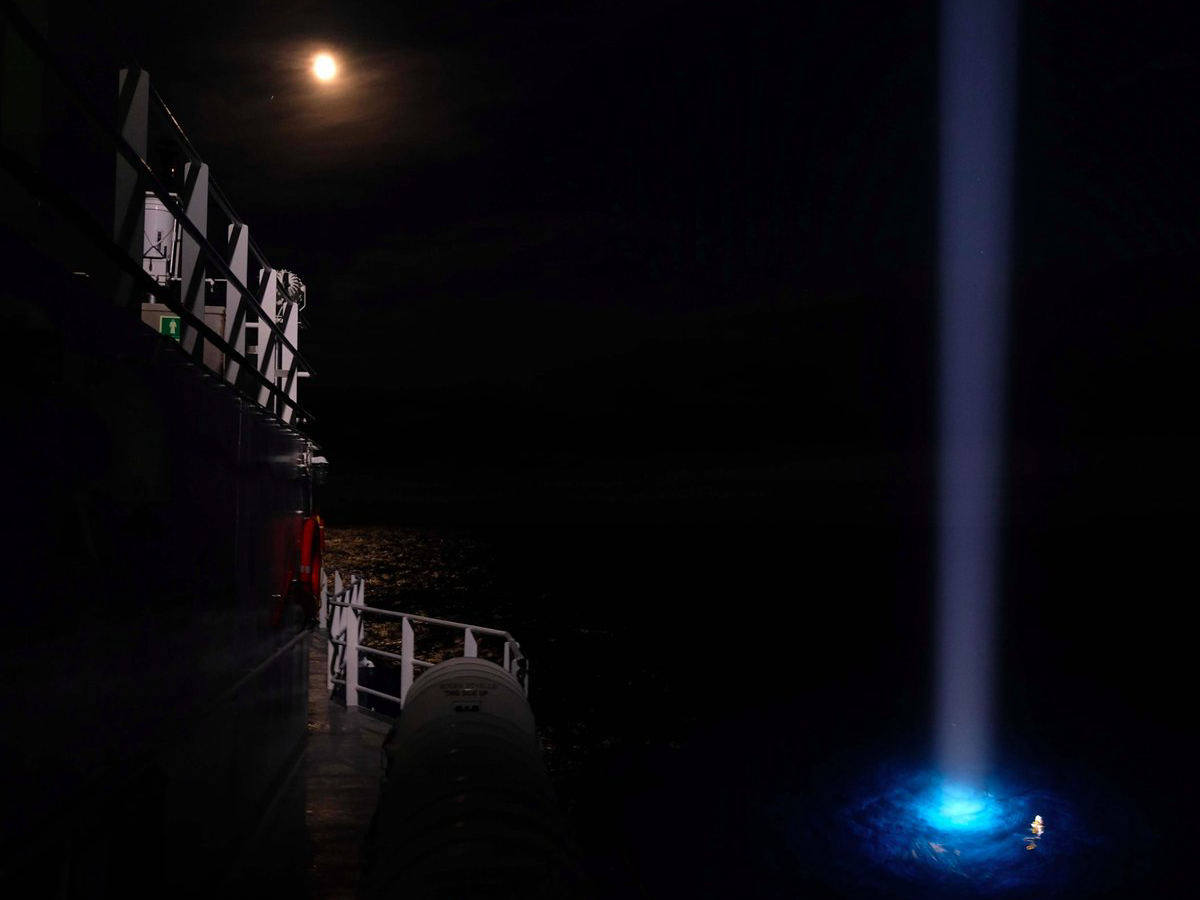 Scientists prepare to recover one of eleven NBSTs deployed during the EXPORTS cruise. Credit: NASA 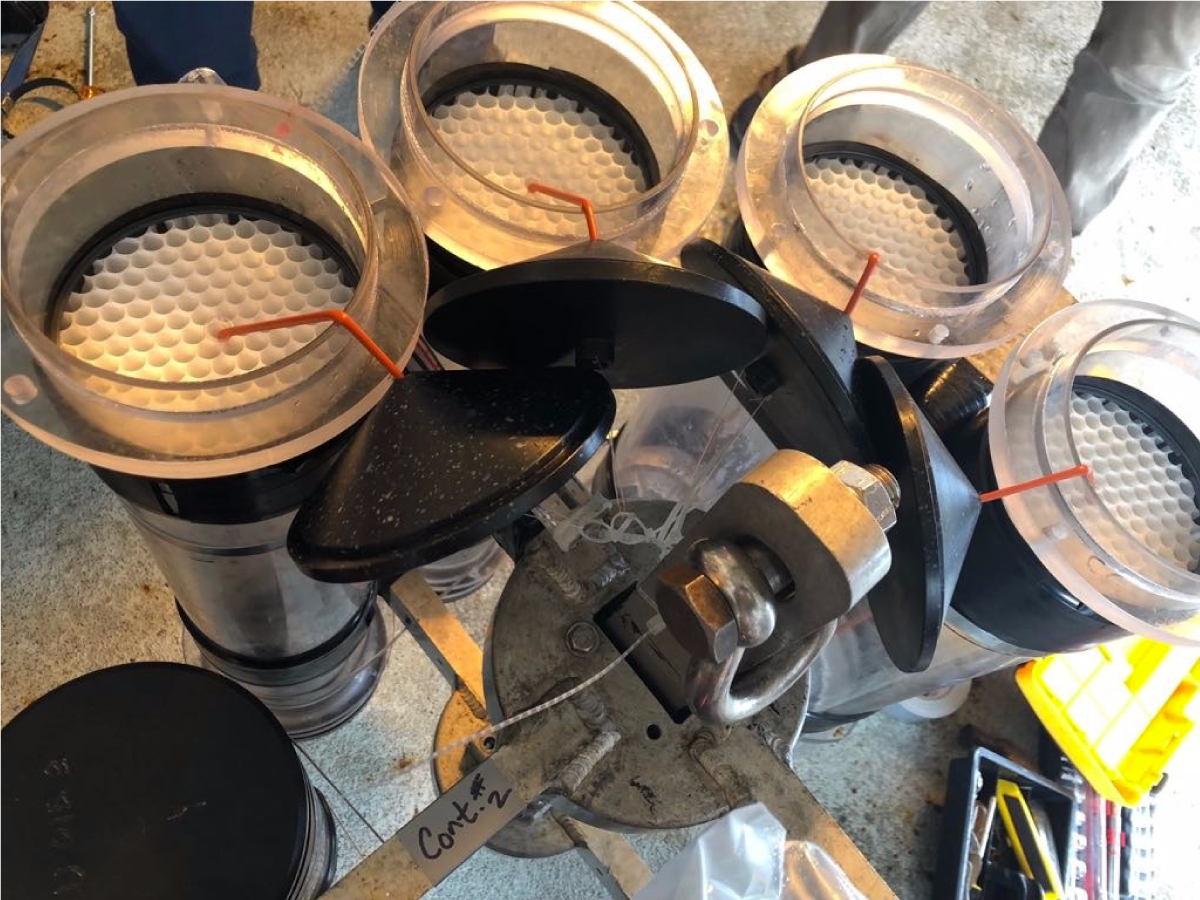 The tops of NBSTs showing the opening through which marine snow - organic material falling from above - drifts. Credit: David Siegel (UCSB) 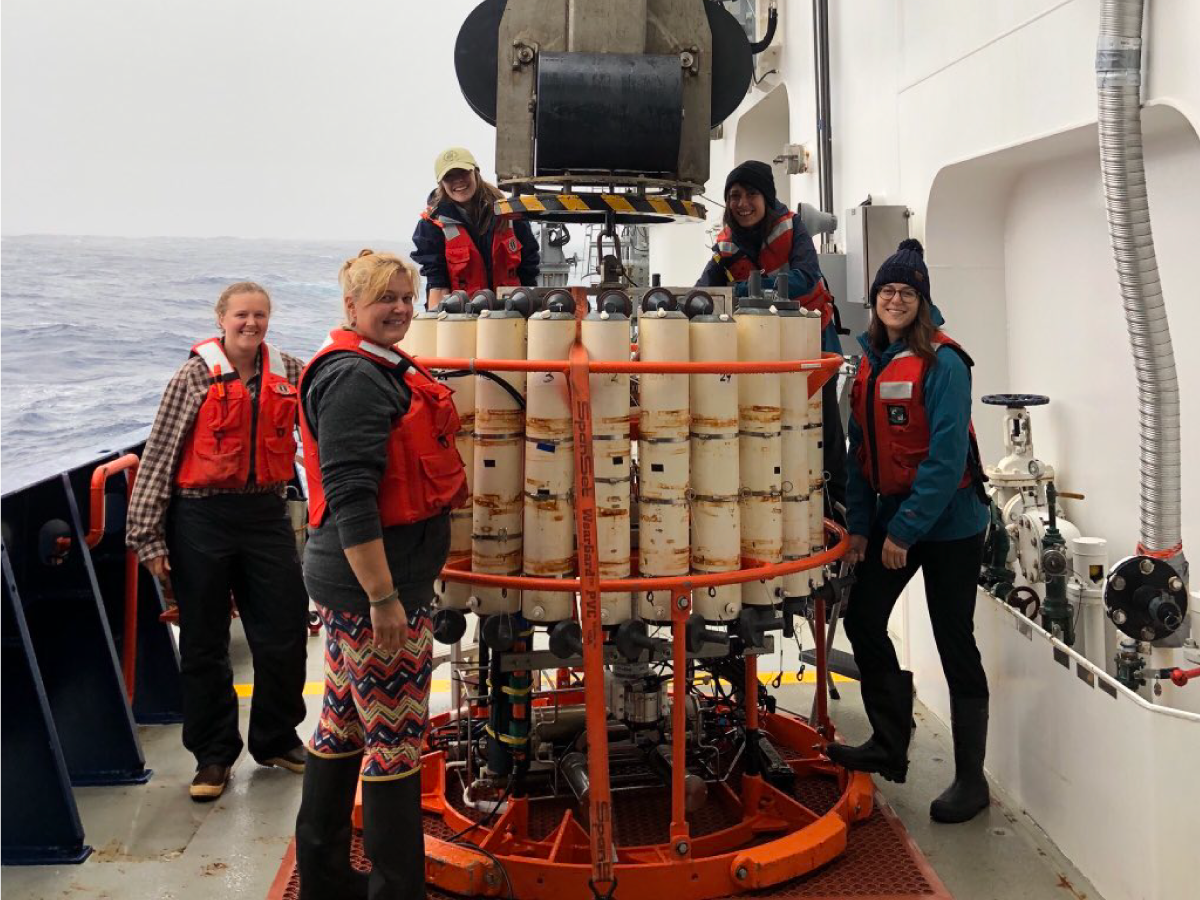 Scientists prepare to deploy a Conductivity, Temperature, and Depth (CTD) sensor, which generates a vertical profile of the water column (surface to bottom). Discrete water samples are collected for analysis via a rosette of Niskin bottles. Credit: NASA 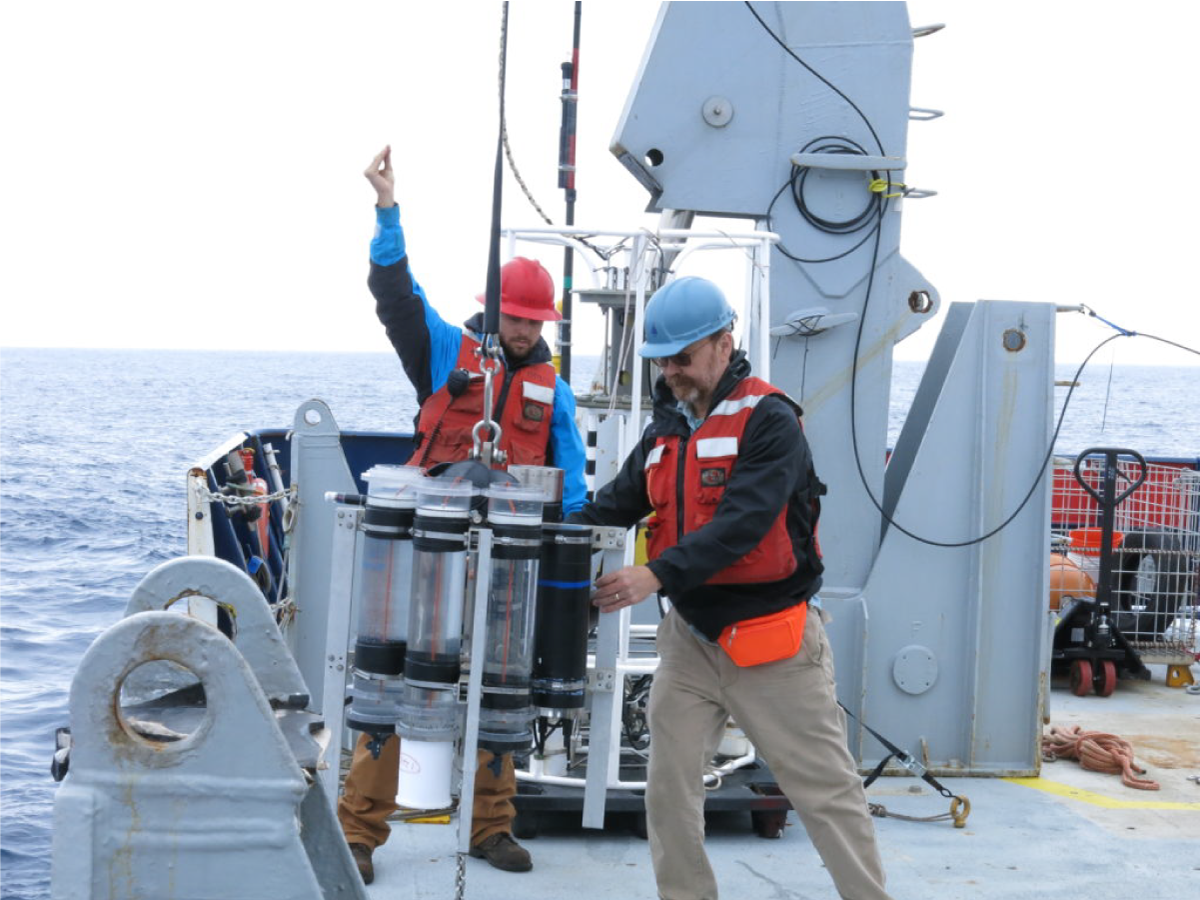 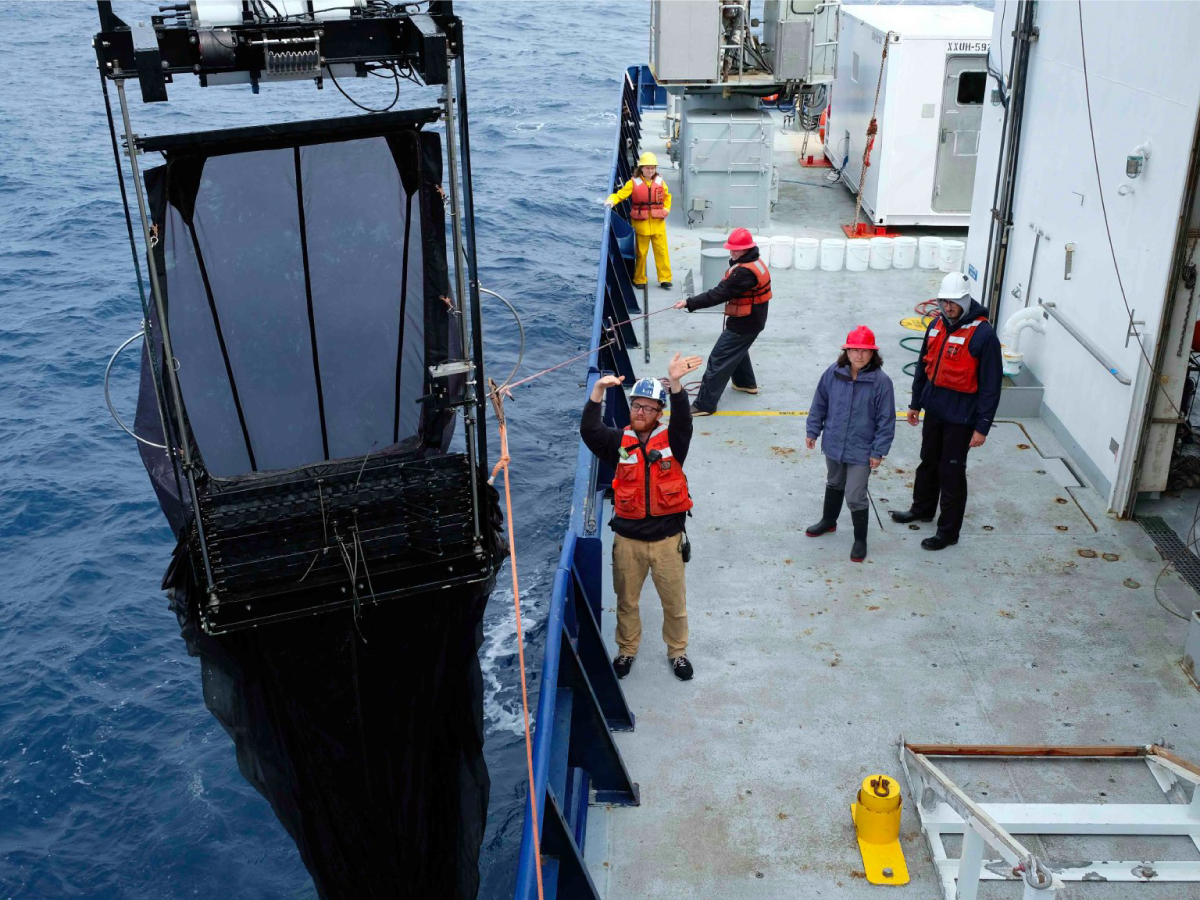 The Multiple Opening/Closing Net and Environmental Sensing System (MOCNESS) is deployed off the bow of the R/V Roger Revelle. This specialized net, which incorporates many different smaller nets, is towed behind a vessel, and enables the collection of plankton throughout the water column. Credit: NASA 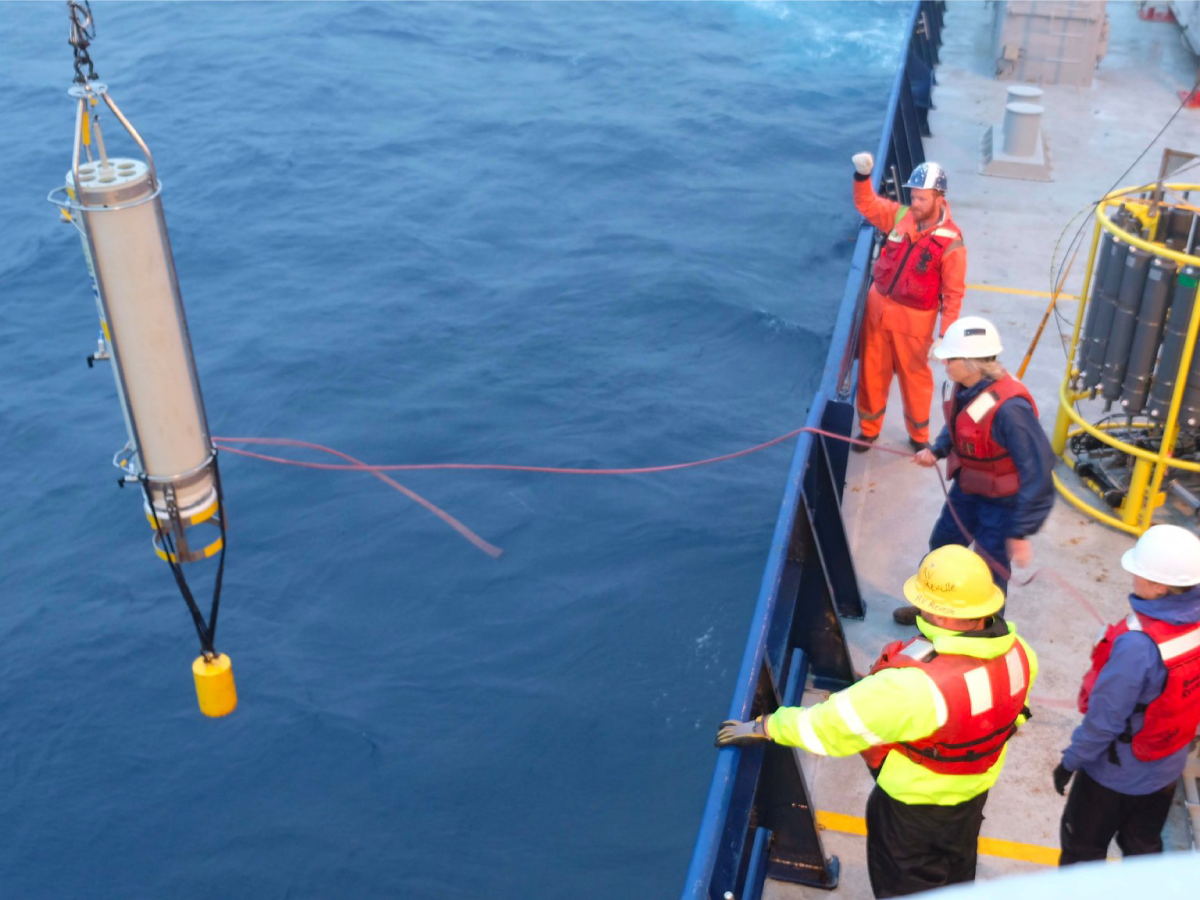 The EXPORTS team deploys a Marine Snow Catcher after several days of rough seas. These instruments sample water from the Twilight Zone - the focus of the cruise - so that scientists can better understand how phytoplankton and zooplankton impact carbon exported to the deep ocean. Credit: NASA 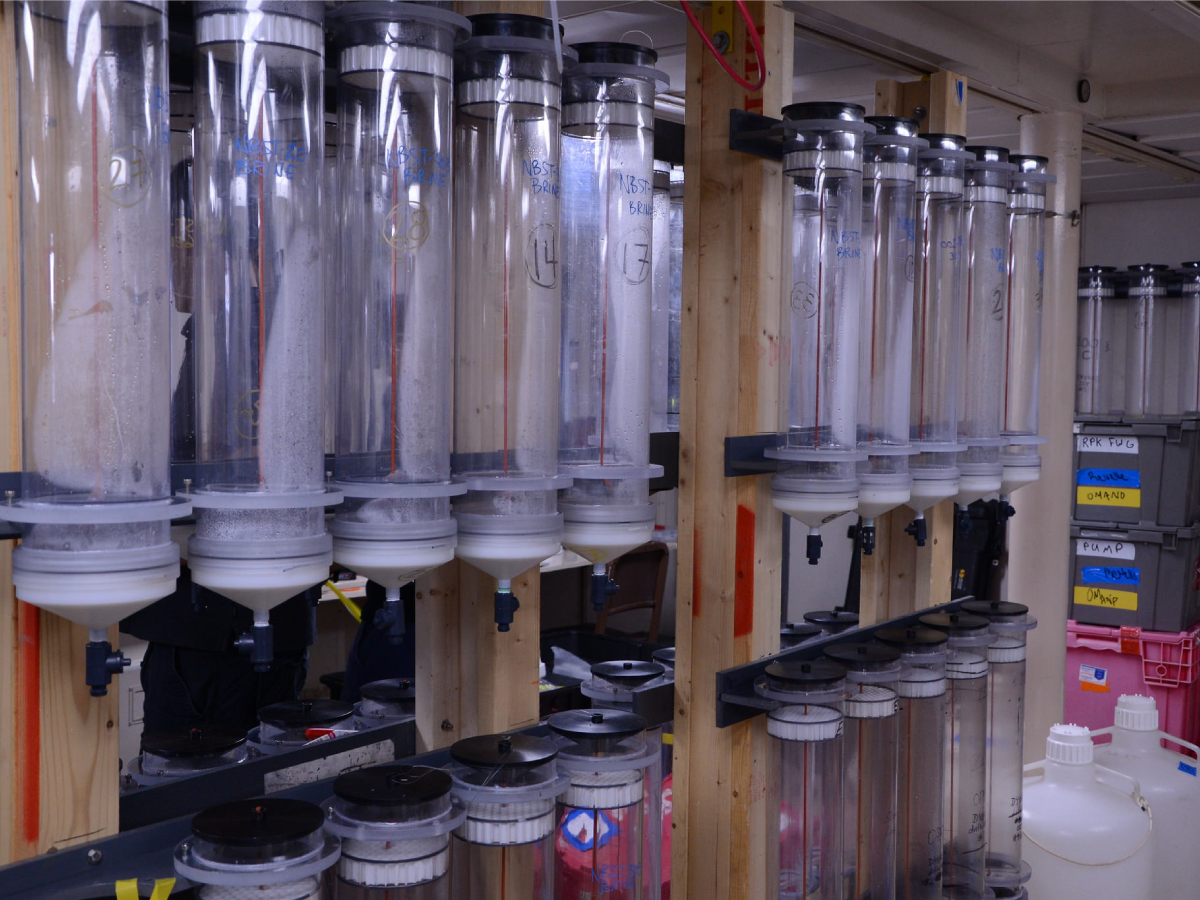 In the hydro lab on board the R/V Revelle, a row of sampling tubes await deployment. Credit: Katy Mersmann (NASA) 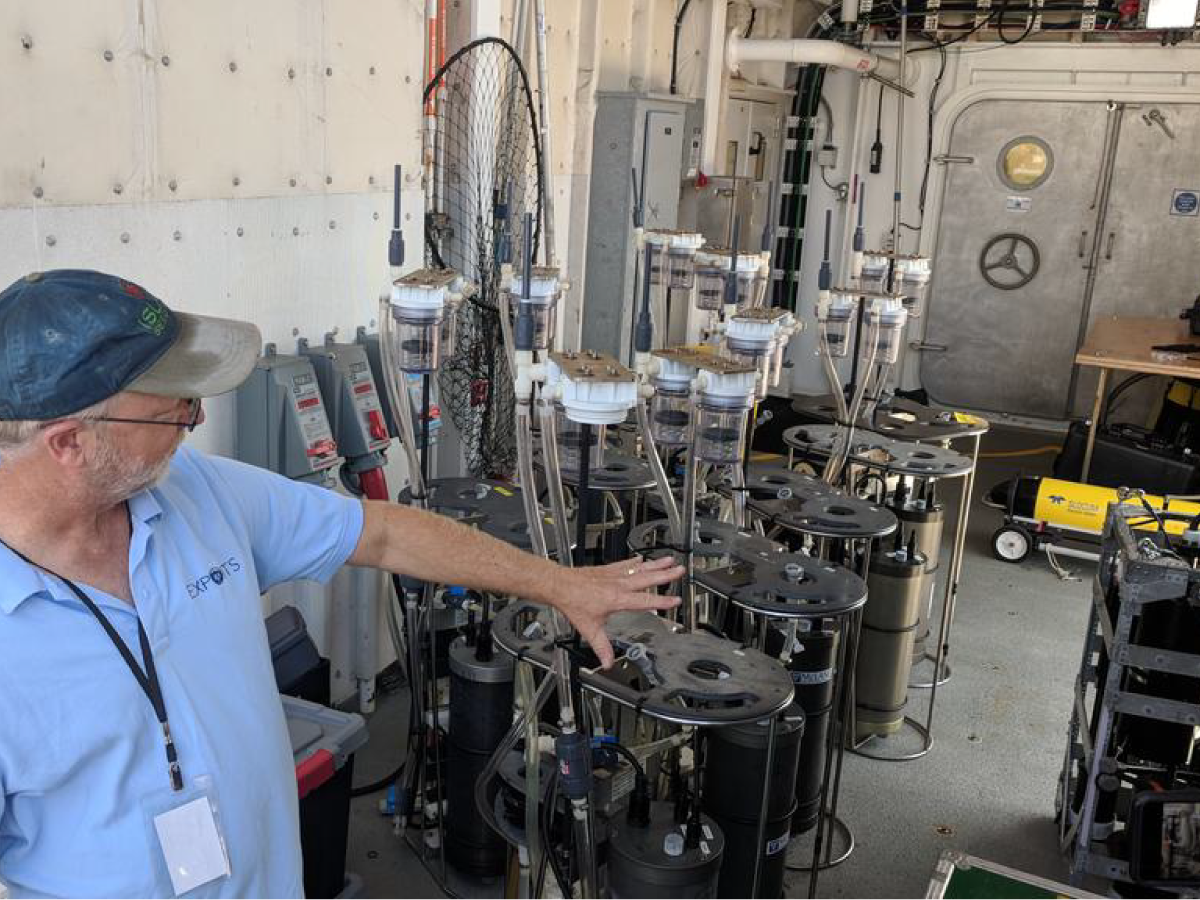 Dr. Norm Nelson, Co-chief Scientist of the R/V Sally Ride, gives the media a tour of the vessel prior to departing for the Pacific. Credit: NASA 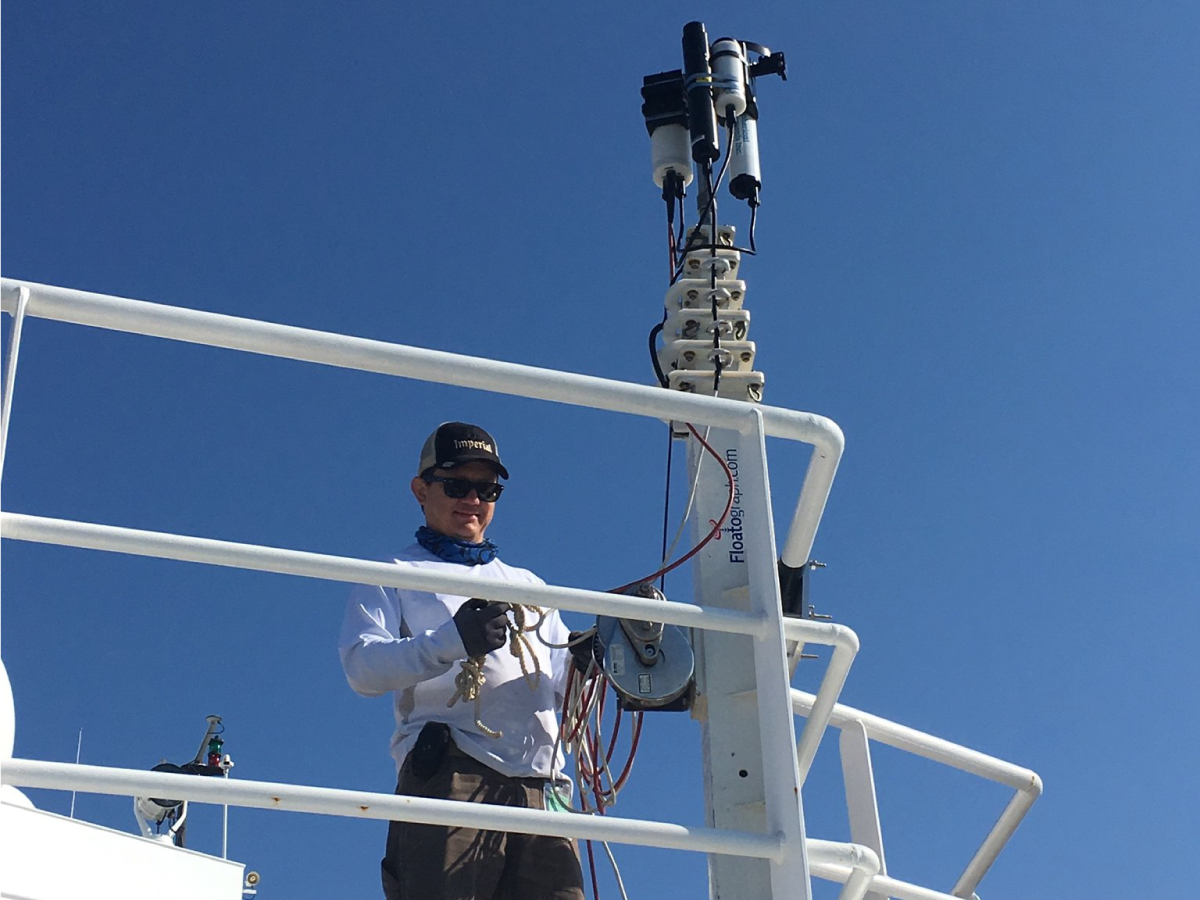 Ship-based radiometers (seen here attached to a deck rail) will collect hyperspectral data on ocean color. The hyperspectral measurements will be similar to those that will be collected during the PACE mission. Credit: NASA 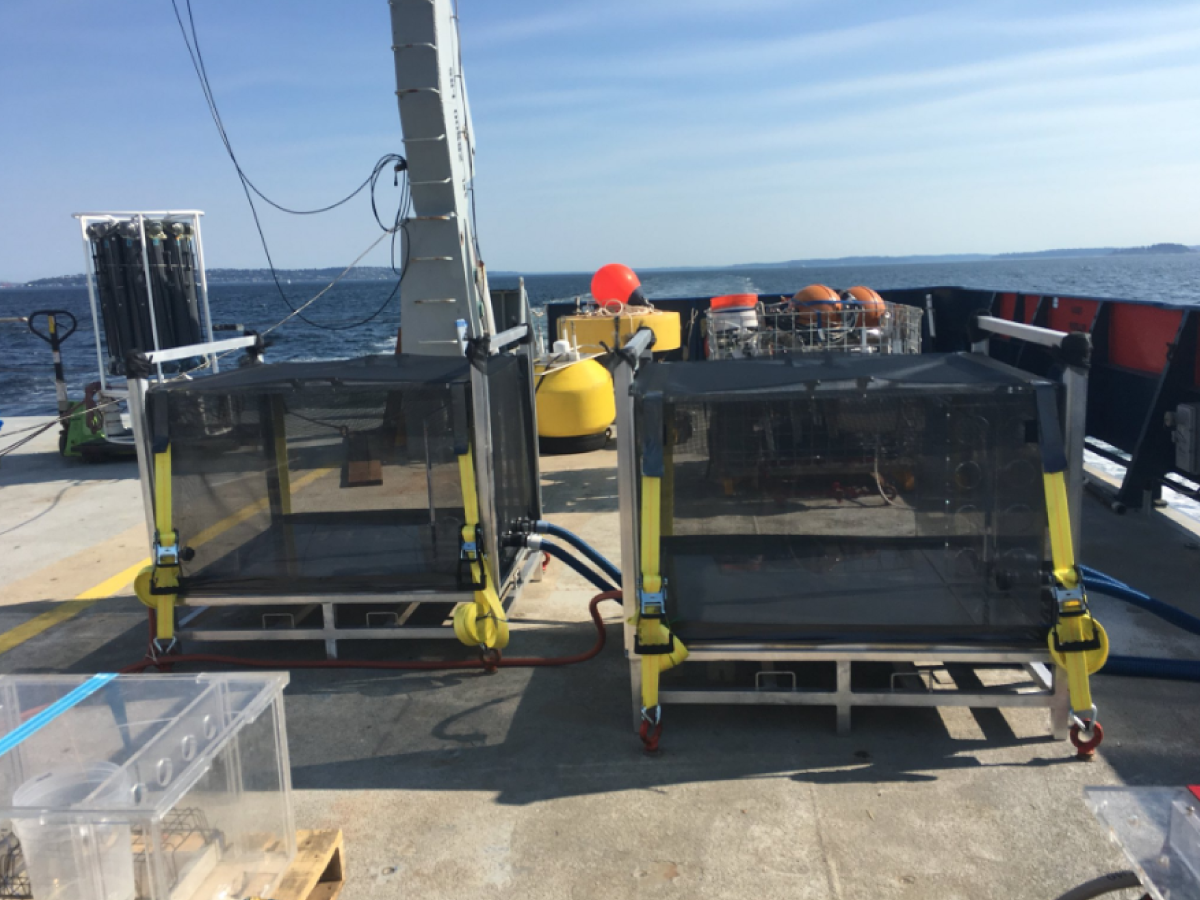 The boxes shown here are incubators for phytoplankton that will be used to study the response of plankton to different environmental conditions. Credit: NASA 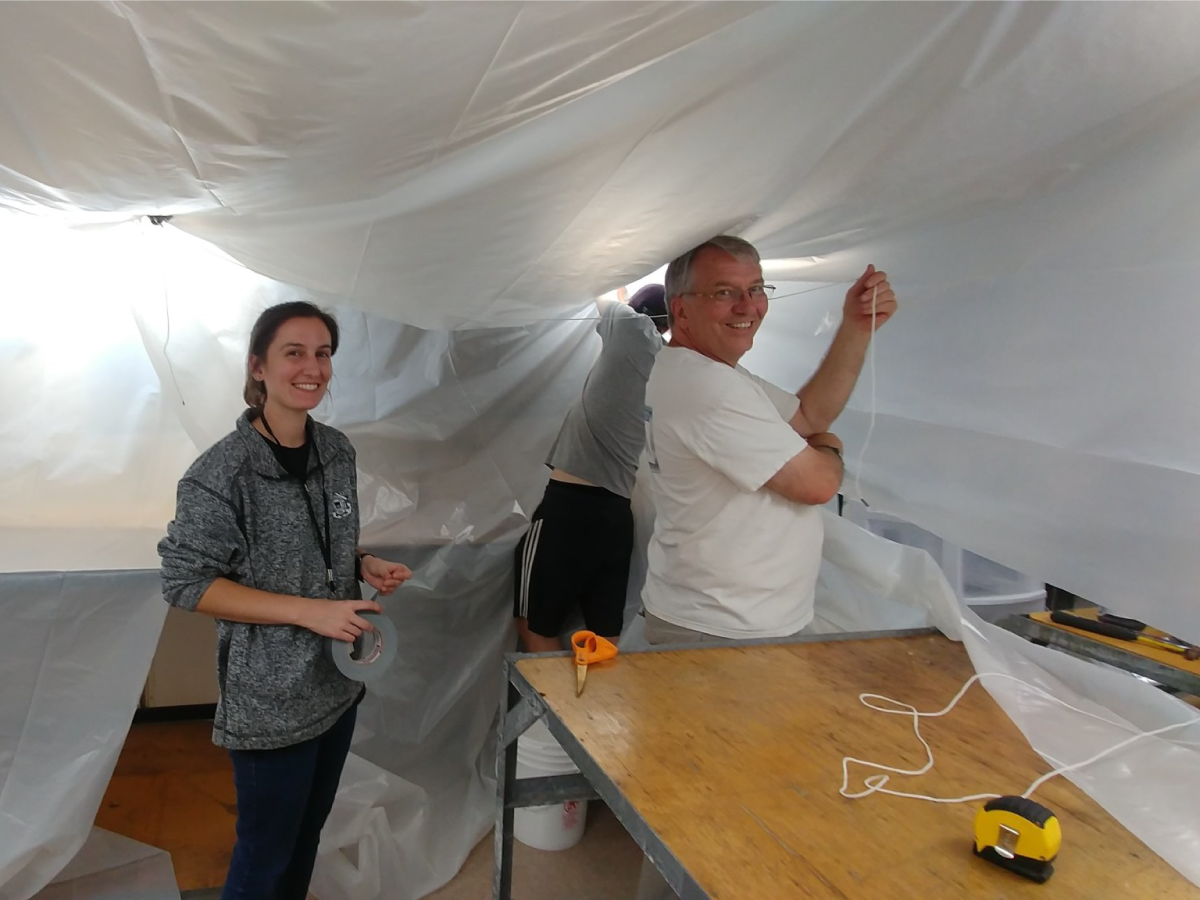 Before heading to the ocean's Twilight Zone, National Science Foundation and EXPORTS scientists build an enclosed, air-tight "bubble" in which to work. Credit: S. Burns (NASA) 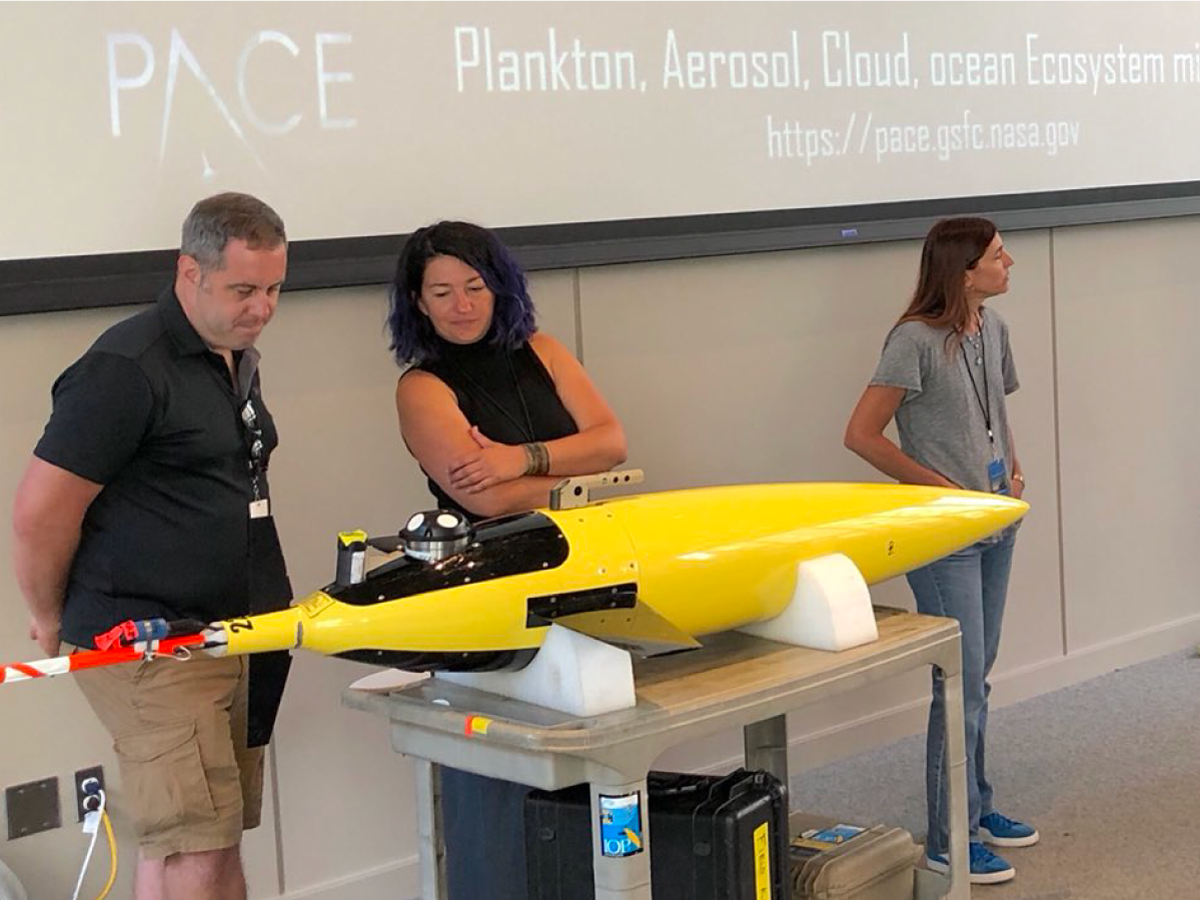 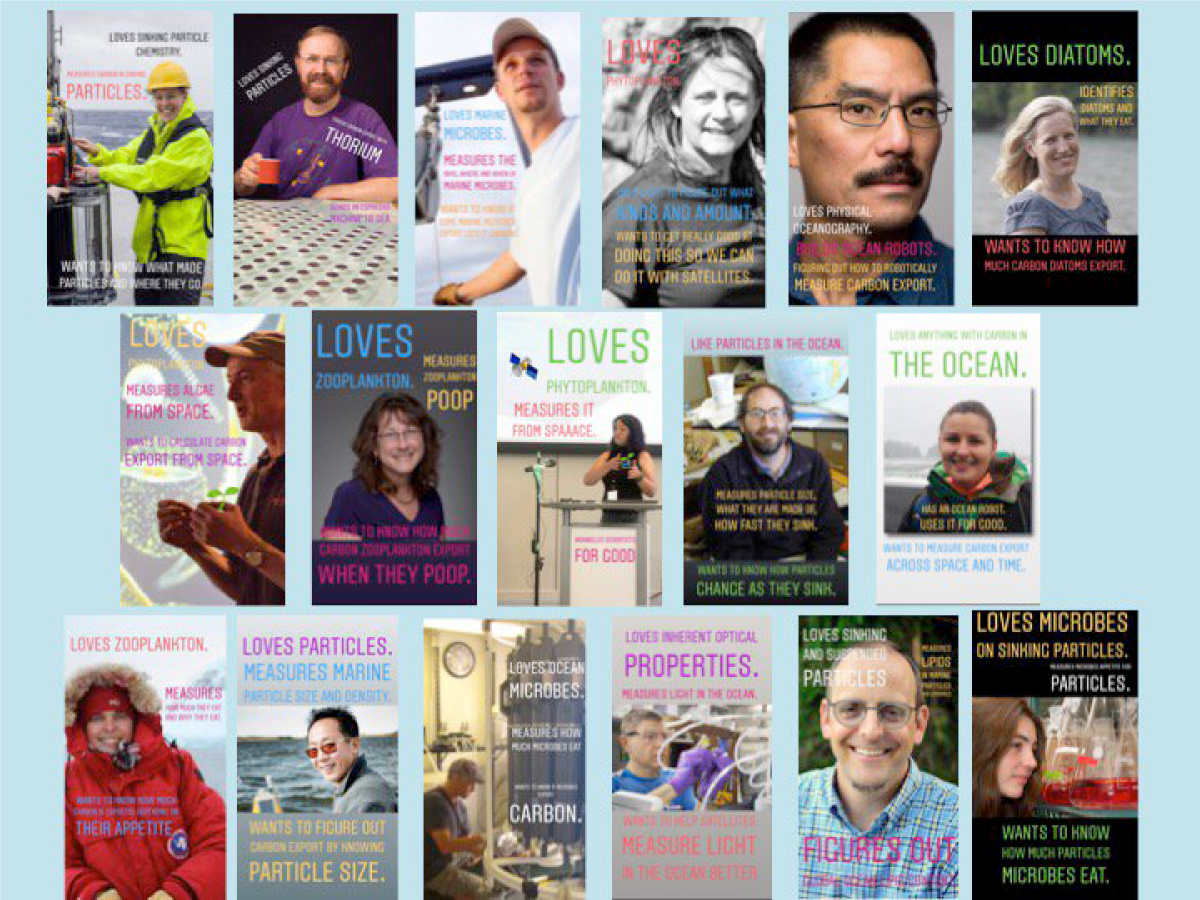 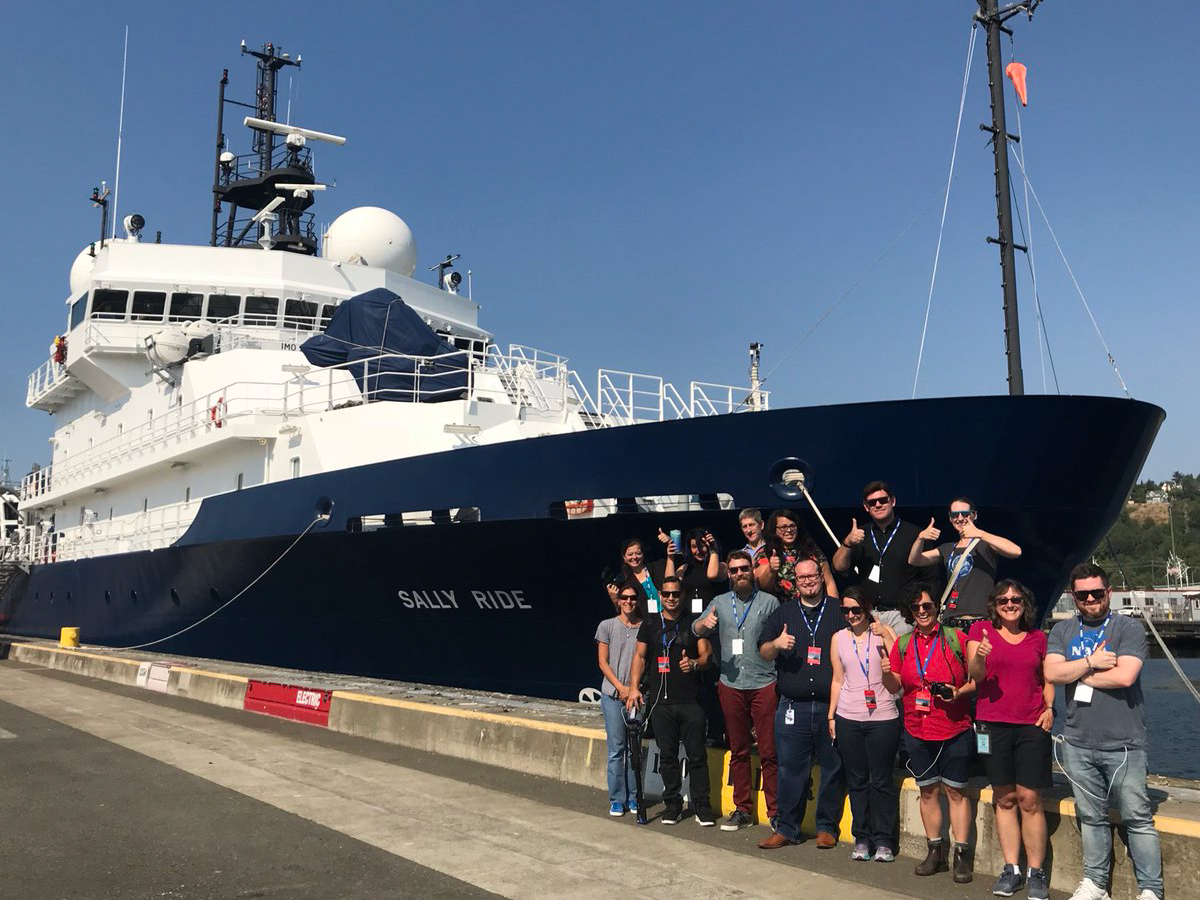 Participants from a NASA social media event pose by the R/V Sally Ride before it embarks on its August 2018 tour of the North Pacific. Credit: NASA 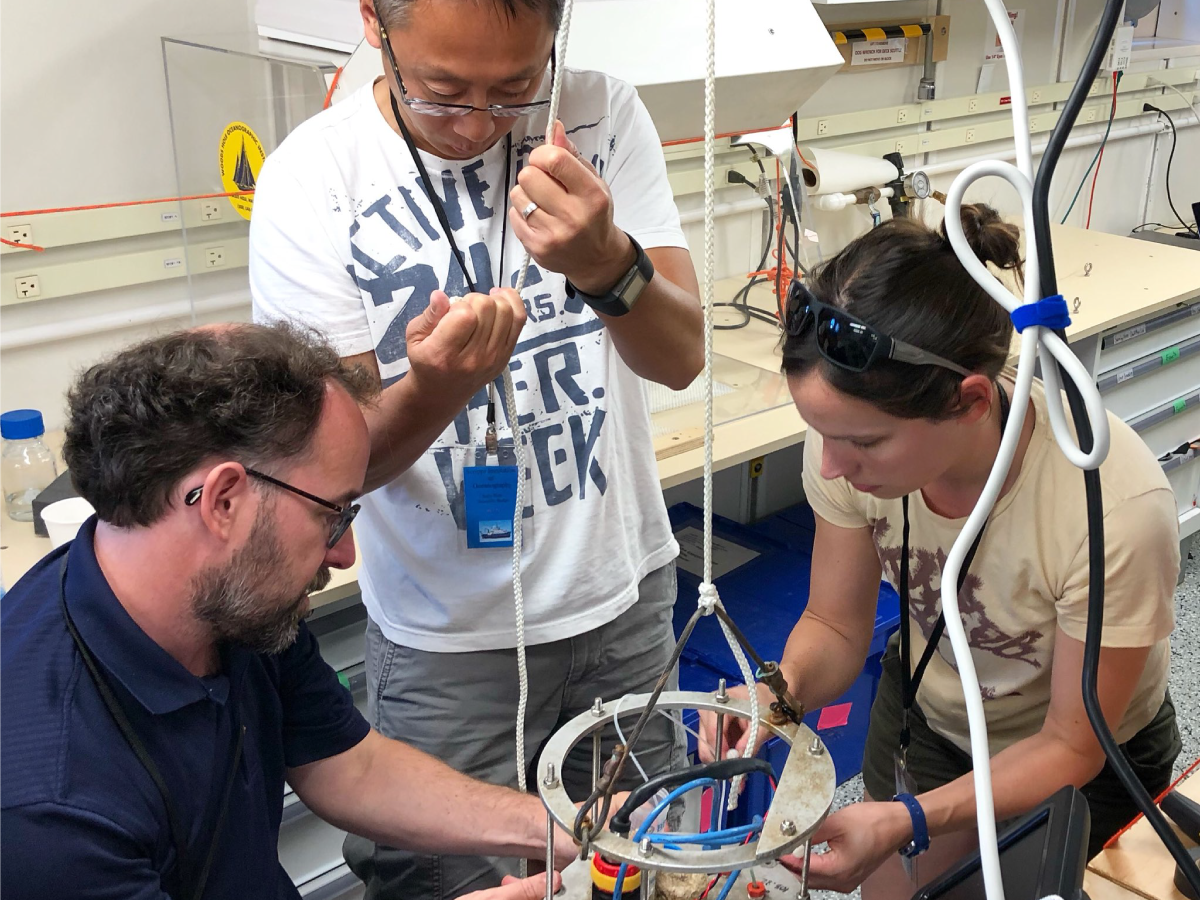 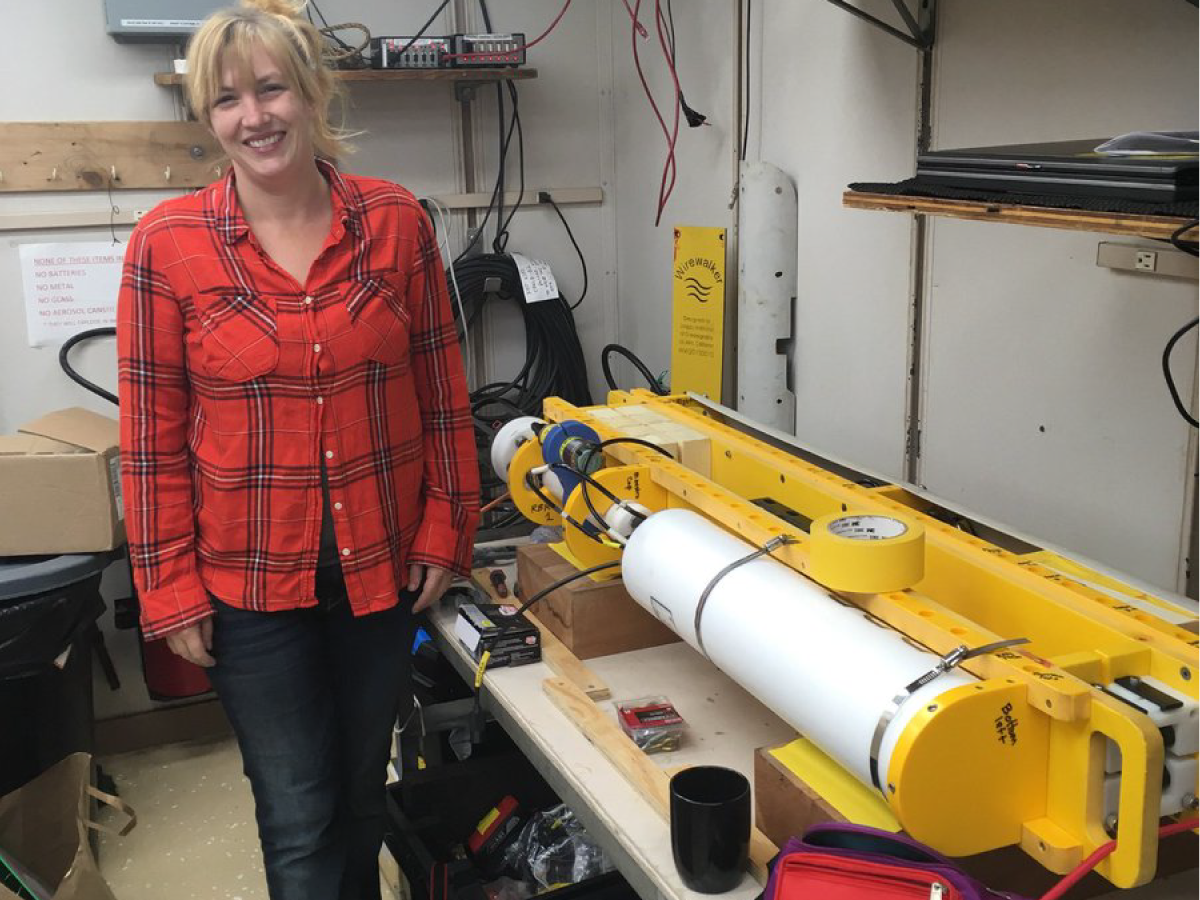 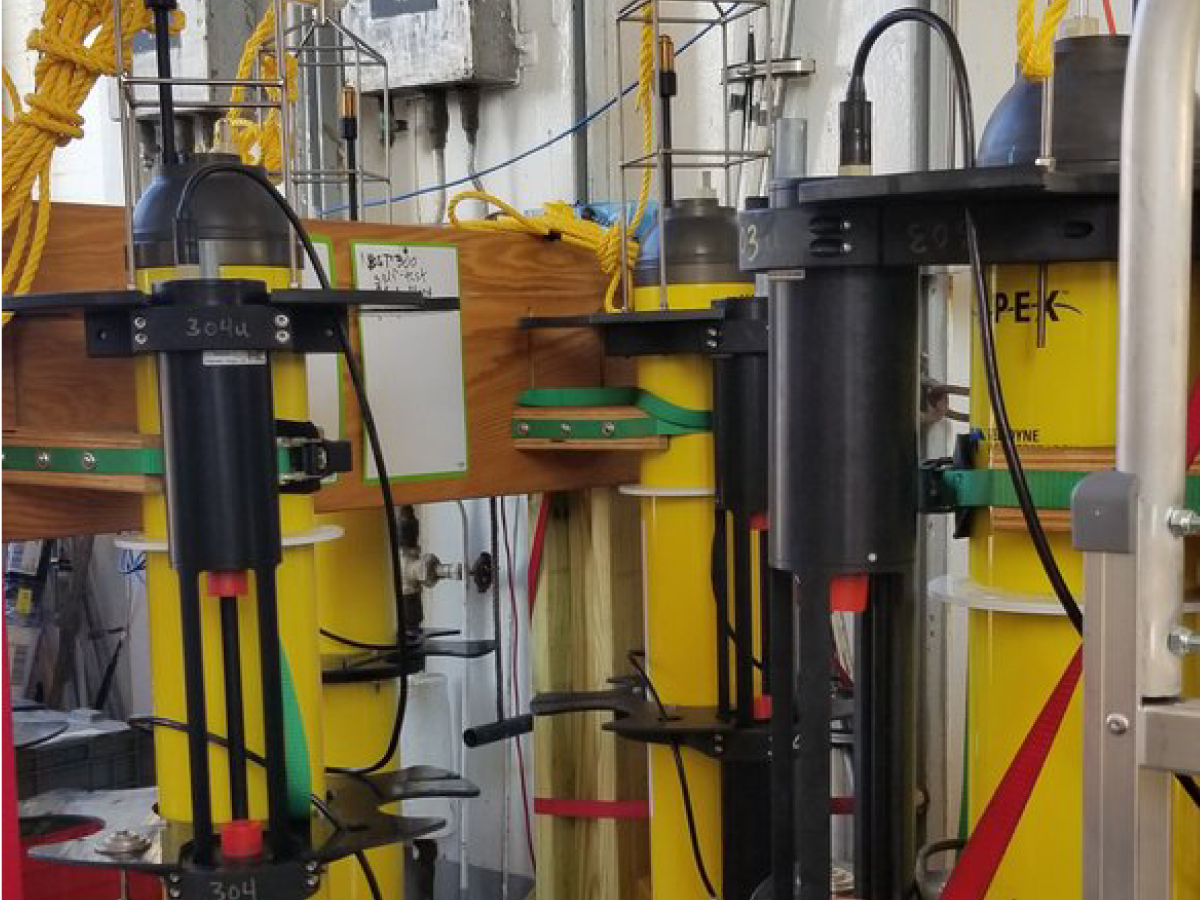 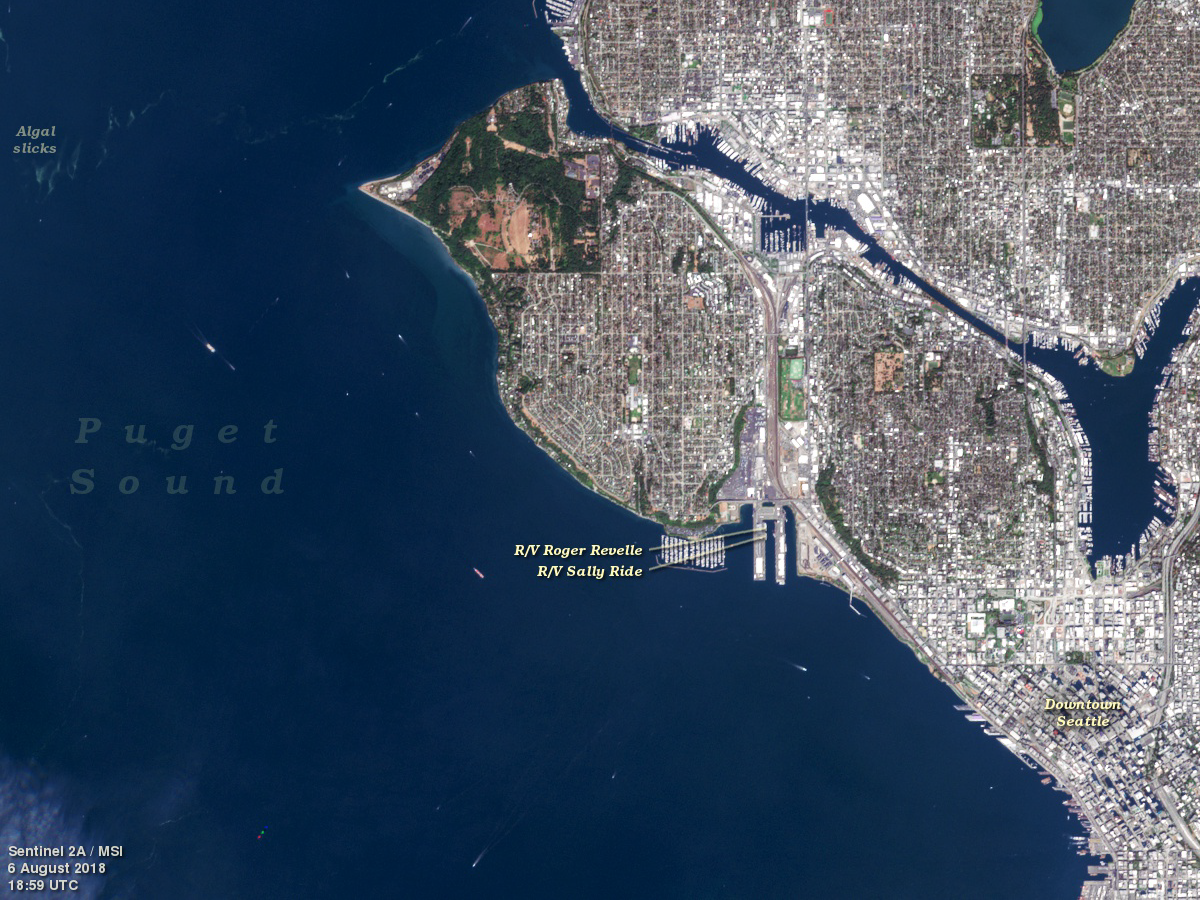 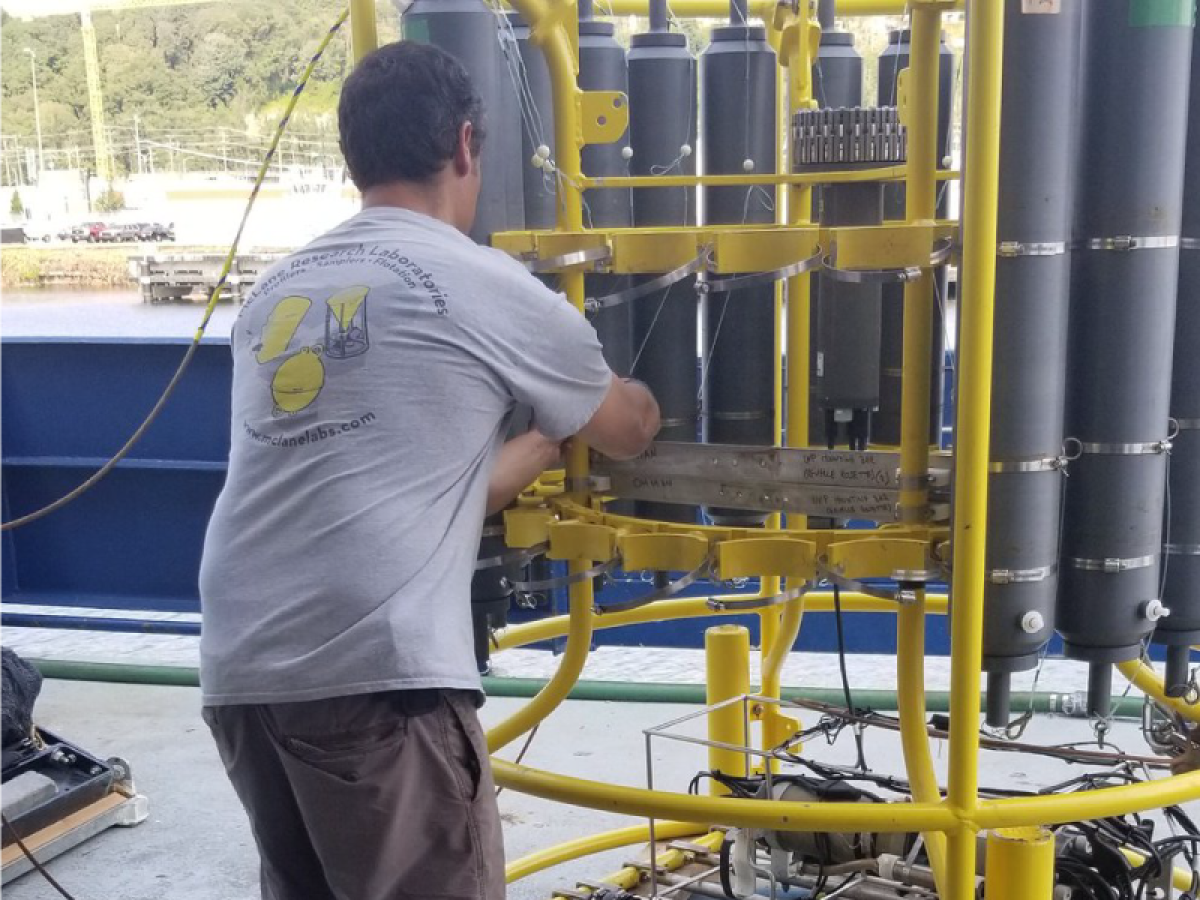 Dr. Emmanuel Boss (UMaine) readies an Underwater Vision Profiler, which will be used by scientists from UMaine and UA Fairbanks to collect water samples during the field campaign. Credit: NASA 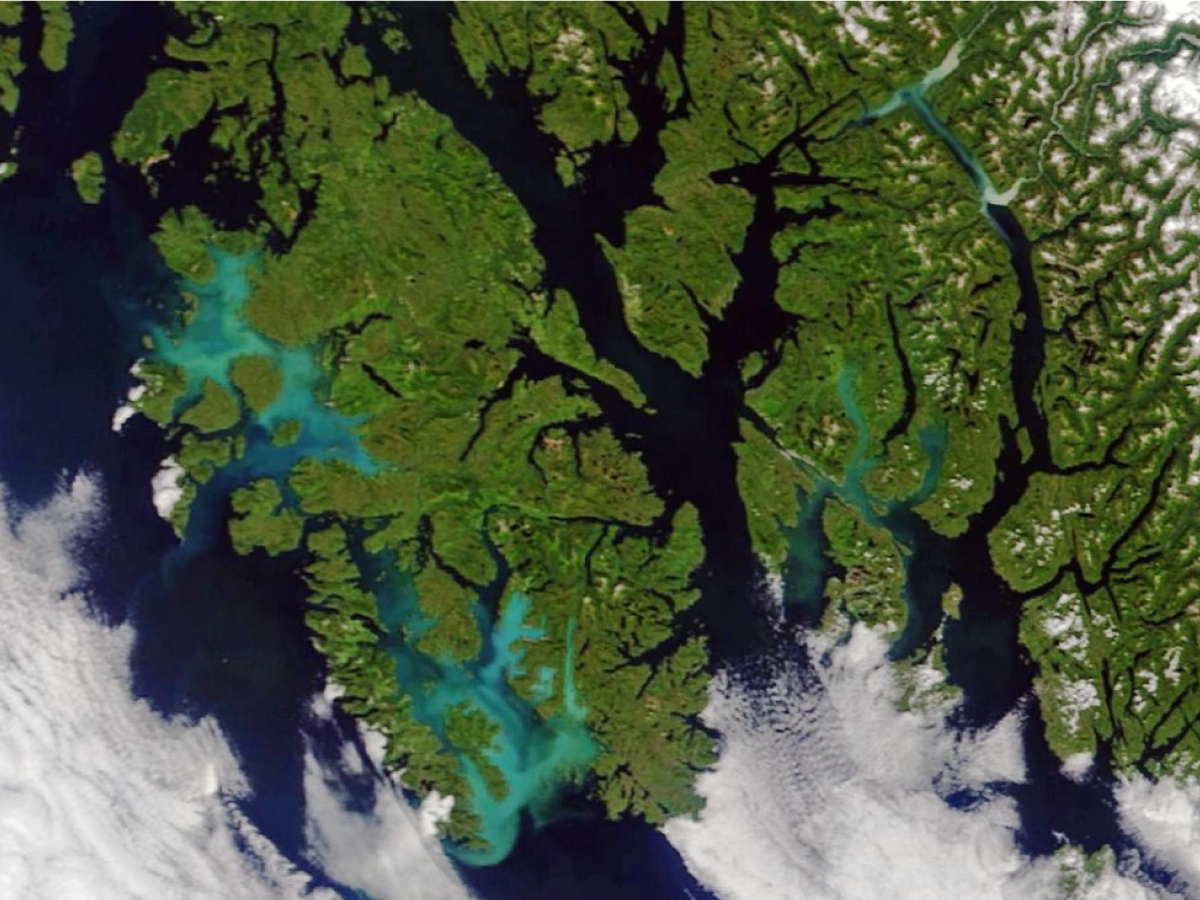 Milky blue water in this satellite view of Prince of Wales Island, AK is thought to be caused by a bloom of non-toxic phytoplankton known as coccolithophores. Credit: NASA 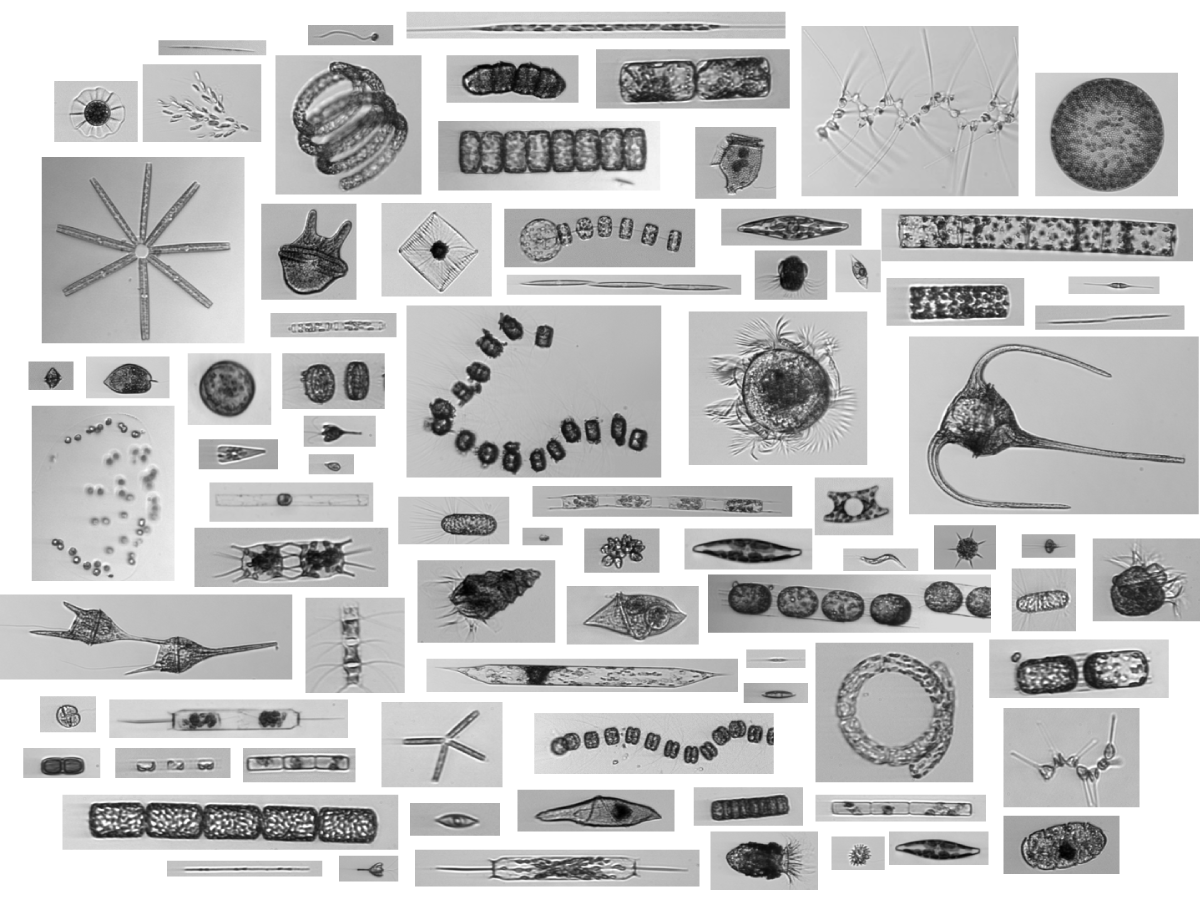 During the EXPORTS field campaign, the Imaging Flow Cytobot (IFC) will give scientists a continuous view of plankton diversity in the northeast Pacific. This collage represents just a small number of the plankton that inhabit Earth's ocean. Credit: Heidi Sosik (WHOI) 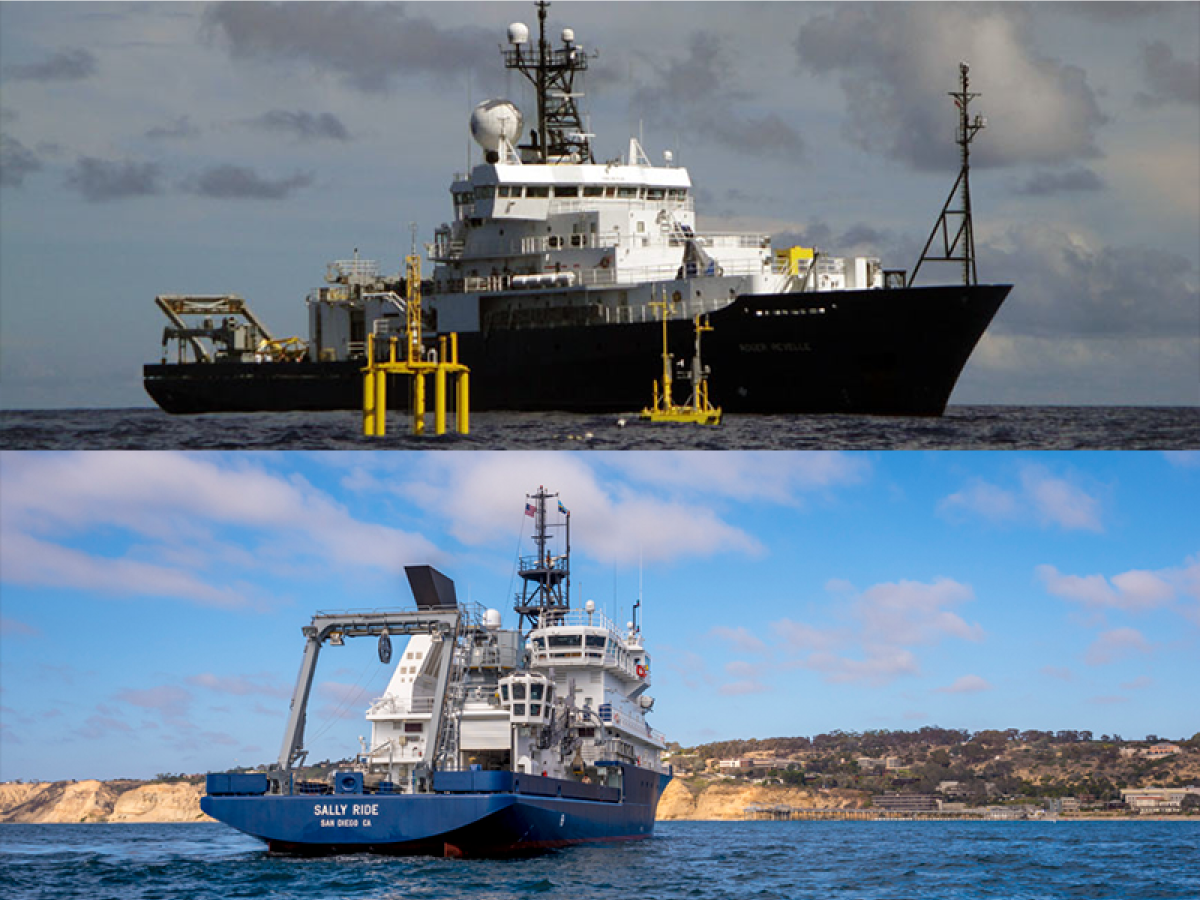 The first EXPORTS field deployment will be to the northeast Pacific Ocean in late summer 2018. The cruise will utilize two research vessels: The R/V Roger Revelle (top) and the R/V Sally Ride (bottom). Credit: Scripps Institution of Oceanography 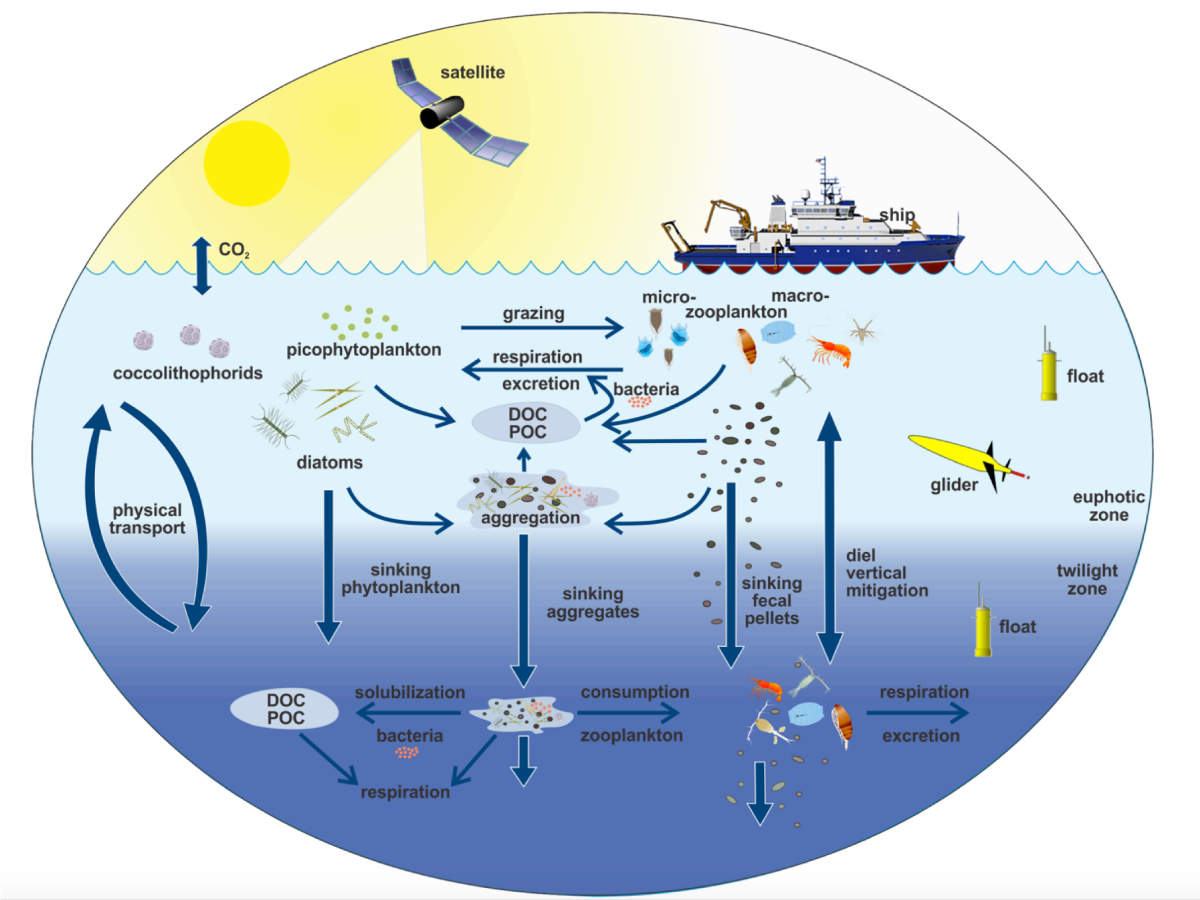 This illustration links the ocean biological pump and pelagic food web. Field campaigns such as EXPORTS utilize ships, satellites and autonomous vehicles to sample many parts of this system. Credit: Adapted from Siegel et al., 2016 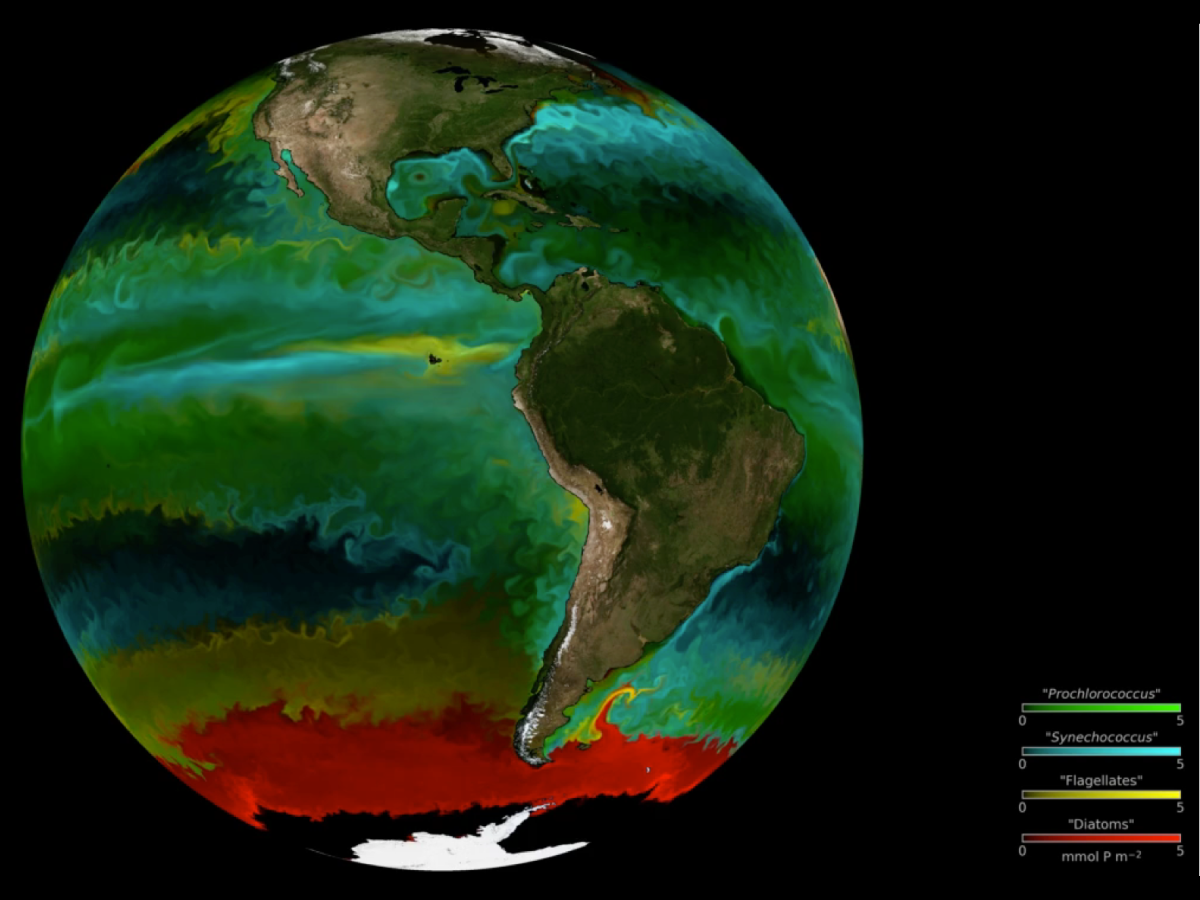 Understanding the location and characteristics of phytoplankton is key to discovering their role in the ocean ecosystem. The colors on this map represent different types of phytoplankton modeled by a high-resolution ocean and ecosystem model. Credit: The Darwin Project (MIT)

The goal of EXPORTS is to track the fate of ocean carbon and study its implications for Earth's carbon cycle. EXPORTS will use advanced ocean observing tools and satellite observations to build a more complete picture of these complex processes.
Click image to view slideshow.